If you’re anything like me, you probably never looked at James Washington at any point during his rookie season and said, “That guy really needs to lose some weight.”

It’s rare to think that about any wide receiver, let alone one who came into the league as a second-round draft pick out of Oklahoma State with a reputation of being an accomplished deep threat. Yet, the Steelers apparently thought so, as they reportedly wanted him to be at 210 pounds by the start of the 2019 regular season.

Why would Pittsburgh want an already lean looking rookie to lose even more weight? Who knows, but it’s likely not an indictment of the youngster, considering the team has asked that of a lot of its newcomers in recent years–Le’Veon Bell, Bud Dupree and even veteran running back DeAngelo Williams were just a few players who were challenged to slim down shortly after arriving in Pittsburgh. 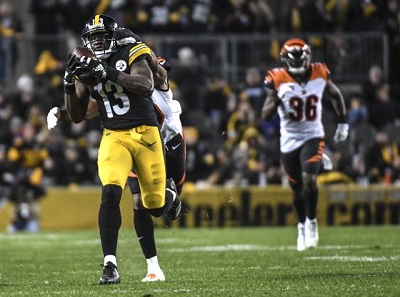 The good news is, James Washington came to the NFL with a reputation for having an incredible work-ethic, one that was developed while working on his father’s farm growing up. And that’s why, according to Washington, per an article published on Steelers.com, he managed to drop 15 pounds and get down to his team mandated weight this spring.

“I went home for the first two weeks, was putting in some hard work with my dad on the farm,” said Washington, courtesy of Steelers.com. “I was trying to cut down on weight. Eat less. I went to Miami and worked in the sun. Worked on strength, strong hands, all the things receivers work on.”

When you read that paragraph, it makes you realize just how hard the second-year receiver worked this spring, and how well-rounded his commitment was to honing his craft (if you simply believed what some reporters were saying on Twitter last week, you would have assumed Washington told them he lost the 15 pounds on Daddy’s Texas farm).

At any rate, if there’s ever a second-year receiver who has nowhere to go but up, it’s James Washington. Coming off a 2018 campaign in-which he caught just 16 passes for 217 yards and one lone touchdown, James Washington certainly has a ton to prove in his sophomore season.

Will he? That’s impossible to know right now. But he certainly seems willing to give it his best shot possible. And with the current look of Pittsburgh’s receiving corps, he has a great opportunity to establish himself–and do so rather quickly.

Yeah, sure, the Steelers signed veteran Donte Moncrief to a multi-year deal, and they drafted Diontae Johnson in the third round, but that doesn’t mean they no longer have high hopes for a man they recently invested a second-round draft choice in.

During the now infamous edition to his weekly radio show on 93.7 The Fan that followed a fairly ridiculous and laughable loss to the Broncos on November 25, Steelers quarterback Ben Roethlisberger called out two of his receivers. One of those receivers was obviously Antonio Brown, who reacted to his quarterback’s criticisms in the worst possible way, as he burned every visible bridge (and maybe even his legacy as the greatest receiver in team history) on his way to Oakland.

Who do you think would have handled the criticism of his quarterback better, a veteran who was in the midst of the greatest six-year run for any receiver in NFL history; or a rookie that had accomplished nothing up to that point in his career?

Obviously, the betting money would be on the veteran. But as I already alluded to, the veteran is now wearing the silver and black as a member of the Raiders. As for the rookie, he took the constructive criticism as just that, and he’s now using it to try and make himself a better football player.

It remains to be seen if James Washington will make that all-important first to second year leap in 2019. But if his commitment to getting better is any indication, he’s certainly willing to do whatever it takes to find out.