Usually, when a former first-round pick is coming into his second season, the expectations are fairly high.

The player and his coaches are often bombarded with questions about his progress that offseason, and whether or not he’ll make that all-important first to second year leap.

With the completion of Steelers OTAs (Organized Team Activities) and mandatory mini-camp, one might assume Terrell Edmunds, the second-year strong safety out of Virginia Tech who the Steelers selected (many say, reached for) in the first round of the 2018 NFL Draft, has been receiving the media coverage befitting his profile and draft pedigree. 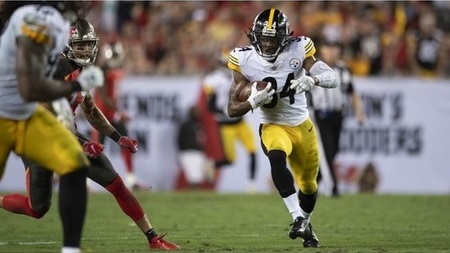 Maybe that’s due to all the drama surrounding Antonio Brown and Le’Veon Bell early in the offseason and their subsequent departures from the organization. Maybe its because the national media decided to dump on Ben Roethlisberger (after all, if Josh Harris says Big Ben is bad, who are we to argue?)

Maybe it’s due to all of the hype surrounding inside linebacker Devin Bush, the Steelers’ latest first-round selection and one they traded away multiple draft choices in order to move up into the top 10 to take.

Maybe it’s because other players like T.J. Watt, Cam Heyward, Stephon Tuitt, Joe Haden and even the much-maligned Bud Dupree are all deemed far more important to the resurgence of a defense that has been a question mark since 2010 and the glory days of Dick LeBeau.

However, last I checked, strong safety, a position that helps make up the back-end of a defense, is extremely important. And despite starting 15 games last year in the wake of the rash of injuries veteran safety Morgan Burnett battled through after signing on as a pretty important free-agent in the offseason, Terrell Edmunds didn’t exactly give anyone much confidence that he was close to becoming a special player.

Perhaps that’s unfair of me. Steelers head coach Mike Tomlin and general manager Kevin Colbert selected Edmunds under the premise that he’d be able to contribute right away, but as a sort of Swiss Army Knife in the secondary where he would play multiple positions–including dime linebacker, where he would utilize his speed and athleticism to make up for the absence of Ryan Shazier, who suffered a horrific spinal injury the season before.

But, again, due to Burnett’s injury woes, Terrell Edmunds saw the majority of his playing-time at strong safety. Was there improvement from the start of the season to the end? Not noticeably. In-fact, the consensus seemed to be that Edmunds looked lost and out of position a good bit of the time. Whether that was due to inexperience or lack of ability remains to be seen.

The Steelers certainly hope it’s the former, because while Terrell Edmunds hasn’t been discussed much by the media and fans this offseason, it’s safe to assume the organization is certainly expecting a huge leap from him in 2019.

“The game has slowed down for him,” slot corner Mike Hilton said in a TribLive article by Joe Rutter last month that was almost as much about Edmunds’ “like” of a negative Tweet from Antonio Brown about Ben Roethlisberger than it was on improving on the field in Year 2. “He’s being more vocal, he’s making more plays. He’s a guy that’s really trying to up his game. He knows that, in the back end, a lot is going to be on his shoulders.”

Those are encouraging words from Mike Hilton. Strong safety is an important position on any defense, but especially a Steelers defense that was once built around the legendary Troy Polamalu.

However, a noticeable improvement in his play from his rookie season to his sophomore campaign could go a long way towards making the Steelers defense better in 2019.

There may not be much hype surrounding Terrell Edmunds as he prepares for 2019, but that doesn’t mean he’s not being counted on to become a better football player.