While pundits have praised Kevin Colbert and Mike Tomlin for their uncharacteristic aggressiveness in bringing Steve Nelson, Mark Barron and Devin Bush to Pittsburgh, reaction to Donte Moncrief’s arrival has been more tepid. 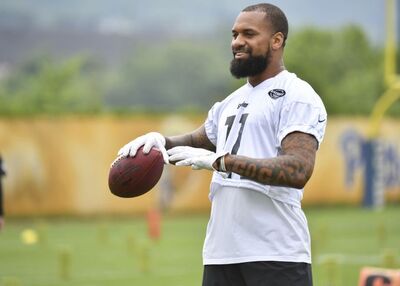 While no one would call the 3rd round pick from the 2014 NFL Draft a “bust” (he certainly has outperformed Dri Archer, whom the Steelers took 7 picks later) thus far his NFL career “lacks the ‘Wow’ factor.” Perhaps more ominously, his catch percentage is trending towards the mid to low 50’s.

During his first three seasons in the NFL, Donte Moncrief was catching passes from Andrew Luck. During 2017 and 2018 he had was Jacoby Brissett and Blake Bortles tossing him the ball. So logically, with Ben Roethlisberger hawking the pigskin his way, Moncrief is going to shine, right?

Football is the ultimate team game. Even the best running back needs a good offensive line to excel. (See Jerome Bettis’ dip in productivity in 1998 and 1999 behind some mediocre offensive lines.)

And while the relationship between pass rush and interceptions is more tenuous than many think, a quarterback under duress is going to make more mistakes than one who has all day to throw. (Go back and watch the tape. James Harrison was closing in on Joe Flacco on Troy Polamalu’s pick-six in the ’08 AFC Championship game.)

It is more direct because a quarterback needs a receiver to catch his passes, and the receiver obviously can’t catch passes that are never thrown. In contrast, great running backs can and do make something out of nothing when blocking breaks down.

All three are quality wide outs. Hines Ward should but probably won’t get Hall of Fame consideration. But each is far less talented than Antonio Brown.

Moving beyond Antonio Brown, a look at how the other two third of “Young Money” have preformed outside of Pittsburgh further complicates the picture. Mike Wallace has never had a quarterback as good as Ben Roethlisberger throwing his way in Miami, Minnesota or Baltimore, and he’s struggled consistently match the performance of his Pittsburgh days.

Contrast that with Emmanuel Sanders, who has generally played better since departing for Denver. But Sanders’ success has come both with Peyton Manning throwing him the ball as well as Manning’s  successors.

Nor should that surprise Steelers fans, who saw John Stallworth post far better statistical seasons catching balls from Mark Malone and David Woodley than he did when Terry Bradshaw stood under center. But no one in their right mind would choose a Malone-Stallworth or a Woodley-Stallworth tandem over Bradshaw-Stallworth.

JuJu Smith-Schuster enters the season as the number 1 receiver, and both coaches and journalists tell us that if James Washington is poised to make a leap in his sophomore year. If that happens then the best-case scenario for Donte Moncrief is that he emerges as the number 3 receiver in the Steelers offense.

But it will also be true that opposing defense will have been focusing on covering Smith-Schuster, Washington and Vance McDonald. So I guess Donte Moncrief presence in Pittsburgh might not contribute much to the QB improves WR/WR improves QB quandary.

2 thoughts on “Does a QB Improve a WR? or Does a WR Improve QB? Could Donte Moncrief Answer the Question?”