When talking about their all-time great Steelers players, cornerback Dwayne Woodruff, who played for Pittsburgh from 1979-1990, rarely (okay, never) is mentioned by fans.

After all, Dwayne Woodruff played the overwhelming majority of his career for a Steelers team that was stuck in a decade-plus post-dynasty malaise after winning four Super Bowls in a six-year period in the 1970s. 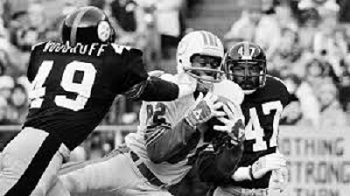 The same can be said for players like Bryan Hinkle, David Little and Louis Lipps, but Dwayne Woodruff actually had the fortune of coming along just before Pittsburgh’s time atop the football mountain came to an end, as it afforded him the opportunity to earn a ring in his rookie season thanks to a 31-19 victory over the Rams in Super Bowl XIV.

In-fact, Dwayne Woodruff had two key interceptions postseason interceptions on the way to the Super Bowl — one in a 34-14 victory over the Miami Dolphins in the divisional round; and one in a 27-13 win over the Houston Oilers in the AFC title game.

When Dwayne Woodruff drove to Latrobe to announce his retirement prior to the start of training camp in 1991, , he was actually the last remaining player from any of those Super Bowl teams from the ’70s.

Dwayne Woodruff’s true legacy was his contribution to the team after his rookie year. Beginning in 1981, he became a full-time starter at left cornerback. The former sixth-round pick out of Louisville would remain a fixture on the left side for the next nine seasons, starting a combined 103 games.

In addition to starting a total of 105 games in 12 seasons, Woodruff posted 37 interceptions and returned three for touchdowns. Woodruff had five defensive touchdowns in all, which is pretty exceptional when you consider Rod Woodson, a First Ballot Hall of Famer and one of the best cornerbacks to ever play in the NFL, had six defensive touchdowns in his 10 years as a Steeler. 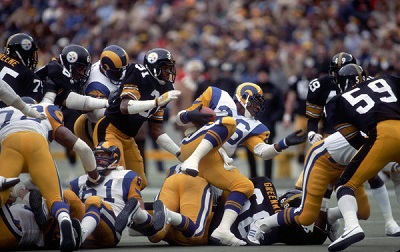 Woodruff’s Wikipedia Page references a key interception that set up an overtime victory over the Bengals in Week 2 of the 1982 season. As a 10-year old boy who had witnessed Cincinnati sweep the once-mighty Steelers in both 1980 and 1981, I can tell you that Week 2 win is one I still cherish to this day. In fact, it was probably the first time I really went crazy as a fan.

Perhaps the greatest testament to Dwayne Woodruff’s skill as a player came during his final season with the Steelers. It the first week of October 1990, following a offensive touchdownless September under Joe Walton‘s offense.

Everyone remembers that week 5 victory over the San Diego Chargers for the offensive explosion that saw rookie Eric Green catch two touchdown passes, with Warren Williams and Barry Foster rushing for two more. (Well, OK, the sum total of people who actually remember that game is probably a lot fewer than “everyone.”)

After injuries to Rod Woodson, Thomas Everett and Larry Griffin left the Steelers with just four healthy defensive backs, Dwayne Woodruff was forced to play right cornerback for the first time in 11 years. As Woodruff relayed to Ed Bouchette of the Pittsburgh Post-Gazette:

“Strange” it might have been, but Woodruff responded with 2 interceptions, one of which he returned for 51 yards in the Steelers 36 to 14 win over the Chargers.

It was well-known during his playing days that Dwayne Woodruff was attending law school at Duquesne University.

Dwayne Woodruff actually began practicing law in the latter stages of his football career, and following his retirement from the NFL, he remained in Pittsburgh and founded the firm, Woodruff & Flaherty.

Woodruff is still a judge in Allegheny County, and he and his wife are very involved in charity work in the Pittsburgh community.

Dwayne Woodruff perhaps falls a bit short of qualifying as an all-time Steeler great, and he arrived a little too late to be associated with the dynasty of the 1970s, despite playing on the Super Bowl XIV team.

But if Dwayne Woodruff doesn’t quite qualify as one of the greatest all time Steelers, he certainly ranks up there as one of Pittsburgh’s best cornerbacks. Any All Time Steelers cornerback depth chart would have Mel Blount, Rod Woodson and Jack Butler at the top.

When you’re neck-and-neck with Ike Taylor on the all-time Steelers corneback depth chart, you’ve certainly authored a career that is worth remembering and honoring. Such is the case with Dwayne Woodruff’s Steelers career.