The Pittsburgh Steelers begin arriving at St. Vincents in Latrobe today bringing the tumultuous 2019 off season to an end. And while Steelers Nation will be treated to interviews and photos of players and coaches, they’ll have to wait a bit before real news surfaces.

Nonetheless, they’ll be lots of juicy headlines to feast on, and here’s a primer for separating the real news from the false flags.

The Steelers have opened camp in the past by announcing contract extensions for Mike Tomlin and Kevin Colbert. Both are due for new deals, but there’s been speculation about whether Art Rooney II will break from tradition this summer.

Likewise, with Ben Roethlisberger locked up, Joe Haden, Sean Davis and Javon Hargrave are candidates for extensions, but in recent summers the Steelers have trended towards resigning veterans closer to the end of camp rather than the beginning. Talk you hear on this front over the next several days will likely be just that, “talk.”

Every year a certain number of players begin camp on the PUP list. Often times this is simply proactive roster management. But at other times it is a red flag. And there are always surprises in the opening PUP announcements.

Casey Hampton began training camp in 2008 on the PUP, but was in fine form when the season started. Maurkice Pouncey has started camp on the PUP and played in full health throughout the season.

In 2015 Bruce Gradkowski’s name appeared on the PUP much to everyone’s surprise given that he’d played as recently as the playoff loss to the Ravens. Bruce Gradkowski got well enough to get activated and play in one preseason game and then his NFL career was done. Senquez Golson began 2015 on the PUP and literally has never played an NFL down.

Ladarius Green and Mike Adams were also surprise PUP additions. Adams never played for the Steelers again and Ladarius Green saw some mid season action before getting reinjured and has been out of football since.

Take Run Test Results with a Gain of Salt

Since Bill Cowher’s days as head coach, the Steelers have begun training camp with an annual run test where players must complete a set number of sprints within a certain time determined by their position. 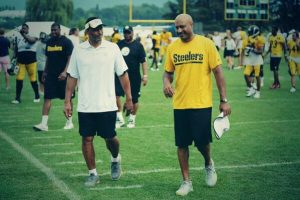 The 1994 Steelers infamously finished the season 3 yards short of a go ahead touchdown in the AFC Championship loss to the San Diego Chargers. When the group assembled in Latrobe the next summer, every player successfully completed Bill Cowher’s run test. At the time, if memory serves, Steelers Digest editor Bob Labriola remarked that the results indicated the focus and commitment of the players.

Injuries to Neil O’Donnell, Rod Woodson, John Jackson and John L. Williams had a lot to do with that. But a player’s only meeting that resulted in Greg Lloyd threatening to break any player who brought a phone or a pager (remember those??) to a team meeting was necessary to spark a turn around.

A little later in the Cowher era, the summer of 1999 started with 1996 first round draft pick Jamain Stephens failing the run test.

At the time the move was hailed as sending a strong signal on the heels of a 7-9 1998 season that ended with a 5 game losing streak. Signal it might have been, but the 1999 team finished 6-10 with Lee Flowers openly accusing unnamed teammates for quitting.

On the flip side, Steelers fans can give thanks that no one will be arriving at St. Vincents via helicopter this sumer….