Sometimes coincidences conspire to become a little too uncanny for comfort. Such is the case with Anthony Wright, the Steelers forgotten 4th string quarterback.

Jim Wexell closed June with an in-depth profile of the Steelers training camp “arm”/4th string quarterback Delvin Hodges. Hodges’ hope of securing a spot with the Steelers rides on an injury to Ben Roethlisberger, Mason Rudolph or Joshua Dobbs.

But Wexell’s profile of the rookie was so thorough that it prompted one reader (ok, it was me) to recall a similar profile written, possibly penned by Wexell, back in 1999 on a similar long shot rookie 4th string quarterback, namely Anthony Wright.

Given that stars rarely align with such eerie precision, it only seems fitting that take a brief look at Anthony Wright’s stint with the Steelers.

In reporting Anthony Wright’s shooting, ESPN and Sports Illustrated recalled his time with the Cowboys, Bengals, Giants and Ravens, but omitted his service to the Steelers. Perhaps that’s understandable. After all, Pro Football Reference doesn’t list Anthony Wright as having played for the Steelers.

And the truth is, Anthony Wright’s time in Pittsburgh merits little more than a footnote in the History of Steelers Backup Quarterbacks should someone like Jim O’Brien ever decide to pen such a volume.

If memory serves, Anthony Wright was a find of Dan Rooney Jr., and acquitted himself well in the Steelers-Redskins scrimmage in early August 1999, at Frostsburg University.

That performance earned Wright preseason playing time where he showed off the arm strength that allowed him to launch 50 missiles which convinced the Steelers to keep him. But, as recalled during last year’s profile of the two times the Steelers kept four quarterbacks, the decision to keep Wright in ’99 was a sign of the depth chart’s weakness, unlike 1995.

The Steelers dressed Anthony Wright a few times at the end of the 1999 season, and word was they even planned to play him in the season finale against the Titans, but that never came to fruition. 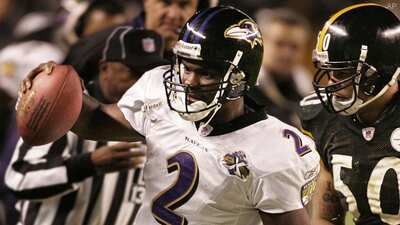 The next summer Tee Martin beat him out for the 3rd string quarterback job, and Wright went on to play for Cowboys, Ravens, Bengals and Giants. Along the way he appeared in 31 games and started 19 of those, amassing an 8-11 record as a starter, going 1-1 vs. the Steelers.

But in some ways, Anthony Wright’s footnote in History of Steelers Backup Quarterbacks is more notable than say that of Steve Bono. To be certain, Bono actually played in multiple games for the Steelers unlike Wright.

But Anthony Wright’s presence in Pittsburgh for one season provides and example of Bill Cowher’s desire to staff a true up and comer in the 3rd string quarterback slot. Whether it was Jim Miller, Mike Quinn, or Pete Gonzalez, The Chin spent the 1990’s trying to find someone behind his established veteran backup who offered legitimate “upside.”

The fact that Cowher would cut Anthony Wright in favor of Tee Martin doesn’t speak well of his talent evaluation skills, but that is another story….