The Pittsburgh Steelers are reeling after the death of wide receivers coach Daryl Drake, who died Sunday morning at age 62. As of Sunday night, the team had not released any details about Daryl Drake’s death, but they did cancel practices on both Sunday and Monday.

We are at a loss for words following Darryl Drake’s passing this morning. Darryl had such an impact on the players he coached and everyone he worked with throughout his entire career. He was a passionate coach and had a tremendous spirit toward life, his family, his faith and the game of football.

Our prayers and thoughts are with his wife, Sheila, his three daughters, his grandchildren and entire family during this difficult time.

Of Daryl Drake, Steelers coach Mike Tomlin said, “He was an amazing husband, father and grandfather, and it is difficult to put into words the grief our entire team is going through right now.” 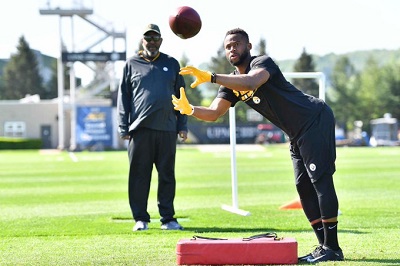 NFL position coaches, as Dick Hoak, reminded everyone on the day he retired, “Are hired to be fired.” Hoak of course beat the system, serving on Chuck Noll’s staff starting in 1972 and Bill Cowher’s stafff starting in 1992 and retiring in January 2006.

But even so, the name “Dick Hoak” likely meant little to all but hard core fans, never mind that Hoak had mentored the likes of Franco Harris, Rocky Bleier, Merril Hoge, Jerome Bettis and Willie Parker.

But Mike Munchack is an exception, not the rule. Randy Fitchner had been on Mike Tomlin’s staff since 2007, yet when he first appeared talking to Ben Roethlisberger on the Steelers sidelines in mid-2018, I had to do a double take before I realized who he was.

Although Drake was charged with filling the shoes of a legend, Richard Mann he maintained a relatively low profile during his stint in Pittsburgh. No one, not even the most bombastic blogger, looked at Antonio Brown’s tantrums and asked, “Would this have happened had Richard Mann was still here?”

Which isn’t to say that Daryl Drake’s coaching didn’t have an impact on the Steelers roster. JuJu Smith-Schuster had a breakout year under Drakes tutelage. While that’s highly probably that JuJu’s sophomore season would have gone similarly regardless of who is position coach was, it is not certain.

Remember “Young Money?” Remember how the trio generally under performed in 2012 which lead (depending on who you believe) Mike Tomlin to bring in Mann to replace Scottie Montgomery.

If nothing else, Daryl Drake leaves this world after watching two of his pupils, James Washington and Johnny Holton log stand out performances in the Steelers preseason win over Tampa Bay.

Daryl Drake is survived by his wife, daughters Shanice, Felisha and Marian, and two grandchildren.