The early word out of Latrobe is that 2nd year quarterback Mason Rudolph looks good. Rudolph spent the 2019 off season working with Adam Dedeaux on his throwing mechanics and footwork.

Per Steel City Insider’s Jim Wexell, Mason Rudolph is throwing the ball with greater velocity, carrying himself with greater confidence, and showing more poise in the pocket. That’s good news for Mason Rudolph who enters his second summer at St. Vincents fighting Joshua Dobbs for the right to be Ben Roethlisberger’s backup. 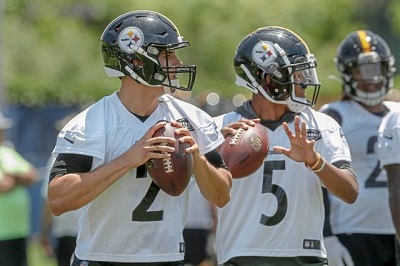 It is also interesting because Mason Rudolph is just fighting Joshua Dobbs, he’s also fighting a bit of Steelers history:

No, we’re not talking about the likes of Johnny Unitas, Earl Morrall, Len Dawson, and Bill Nelsen whom the Steelers pushed away only to see them return to punish Pittsburgh. Those were personnel mistakes. But the Steelers simply lack a strong record for grooming quarterbacks from the bullpen.

Before the salary cap, NFL coaches nurtured quarterbacks like fine wine. Often times they’d draft quarterbacks with an eye towards developing them for a few years rather than start them as rookies.

Ben Roethlisberger got a baptism by fire as a rookie, and led the Steelers to Super Bowl XL a year later. Bradshaw’s ascension to Super Bowl caliber quarterback started with the first game of his rookie year. The process resembled a traumatic midwifing rather than methodical maturation.

The Steelers picked Mark Malone with the 1st pick in the 1980 draft, and Malone had 3 years to learn at the feet of Terry Bradshaw and Cliff Stoudt. Mark Malone led the 1984 Steelers to the AFC Championship in his first year as a starter, but it was all downhill after that.

During the 1987 season, when Mark Malone was in route to posting a 46.4 passer rating (no, that’s not a typo that’s forty six point four), Chuck Noll defended his decision to keep Bubby Brister on the bench explaining, “He needs to develop.”

Bubby Brister posted a 65.3 passer rating when he became the starter in 1988 and a year later he helped the 1989 Steelers “Shock the World!” by winning a playoff game after losing their first two games by a score of 92-10.

(And this is from someone who told a taunt that the Cowboys were going to “Win the Aikman Derby” on a Boy Scout camping trip in late 1988, “We don’t need Troy Aikman. We have Bubby Brister.”)

Neil O’Donnell spent his rookie year behind Bubby Brister and Rick Strom. As Bob Labriola observed in his early 1991 off season roster analysis in the Steelers Digest, “If all goes well a year from now O’Donnell will have done nothing more than watched and learned while holding a clipboard.”

By that time Kordell Stewart had gotten himself into the mix as “Slash” and remained there until late 1996 when Bill Cowher formally elevated him to backup status. That didn’t last long as Stewart was the full time starter by opening day 1997.

In between O’Donnell and Stewart, there was Jim Miller, another quarterback the Steelers had drafted to develop. Jim Miller got 1994 and 1995 to mature, but his stint as a starter lasted all of one game.

Word to the Wise on Mason Rudolph – Pray for the Best, Prepare for the Worst

Does this history somehow spell doom for Mason Rudolph? No, not at all. As Mike Tomlin would remind us, “Mason Rudolph is writing his own story.” But history offers an important lesson nontheless.

Just as it was for O’Donnell in 1991, the plan in 2004 was for Ben Roethlisberger to watch and learn behind Tommy Maddox. At 12:11 in the 3rd quarter of a week two contest against the Baltimore Ravens, Gary Baxter changed everything by knocking Maddox out of the game.

God willing, several years lie between Mason Rudoph and his first meaningful NFL snap. But its good to know he is making strides towards being ready just in case.