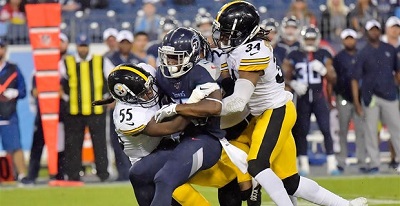 Quarterbacks
Since the third preseason game is the one where starters play the most, Ben Roethlisberger started and played three series. It’s hard to say if Roethlisberger was rusty or just looking to get the night over with, considering most of his passes were of the very short variety.

On the night, Roethlisberger was 8 of 13 for 63 yards and a 17-yard touchdown strike to JuJu Smith-Schuster on his third and final series. Mason Rudolph entered the game late in the first quarter, and on his initial throw of the game, he connected with college buddy James Washington on a 41-yard touchdown pass. It wasn’t necessarily a stellar night for Rudolph, as he completed six of nine passes for 75 yards, a touchdown and an interception on what appeared to be some miscommunication between he and Washington. Joshua Dobbs entered the game in the second half and played the rest of the way, completing four of nine passes for 79 yards and an interception. However, his night wasn’t as bad as his stat-line indicated, and he could have used some help from rookie tight end Zach Gentry on the interception. Grade: B-

Running Backs
Running behind his full starting offensive line for the first time this preseason, James Conner looked like the player he was last year before injuries derailed him; Conner carried five times for 41 yards, while pulling in two passes for 15 yards. Even with the rookie Benny Snell Jr. out with an injury, it was a quiet night for Jaylen Samuels, who carried just four times for 16 yards and caught two passes for an additional 11. Trey Edmunds, the brother of Terrell, carried six times for 12 yards. Grade: B

Wide Receivers
For the first time this preseason, JuJu Smith-Schuster looked like his old self. Whether that was the result of playing with his franchise quarterback or the result of getting his first extended action is a question that can’t be answered. But he did catch four passes for 37 yards and a touchdown. It was a relatively quiet night for Washington, aside from the touchdown, which was his only catch. Young hopeful, Trey Griffey reeled in one pass for 23 yards, while veteran hopeful, Johnny Holton only had two catches for 12 yards and didn’t help his cause on two sideline passes–one in-which the cornerback pulled him down out of bounds before he could get both feet in; and one in-which he was called for offensive pass interference–that could have made his night a little better. Brandon Reilly, a youngster Pittsburgh claimed off the waiver wire in July, had a decent night, pulling in two passes for 41 yards. Diontae Spencer, the punt return guru, didn’t do much in that regard, nor in the passing game, but he did gain 29 yards on an end-around. Grade: B

Tight Ends
It was another lost night for this unit. Vance McDonald, who fumbled on his lone reception a week earlier, dropped an early pass and wound up with zero on the night. The rookie Gentry had one catch for 15 yards, but could have had another had he reeled in the relatively high pass by Dobbs that resulted in his interception. Xavier Grimble continues to play uninspired football in his quest to replace Jesse James as the number two tight end. Grade: D

Offensive Line
Much to no one’s surprise, the highly decorated unit dominated when all five starters — Alejandro Villanueva, Ramon Foster, Maurkice Pouncey, David DeCastro and Matt Feiler — were in the lineup. Roethlisberger didn’t get touched, and, to reiterate, Conner looked spectacular. Grade: A

As he’s sometimes wont to do when clicking on all cylinders, Stephon Tuitt looked like a man among boys, posting two sacks and the game’s first points when one of those resulted in a safety. Cam Heyward contributed four tackles and a sack, and even Dan McCullers played extensively and recorded four tackles. Grade: A-

Linebackers
Another impressive night for the unit as a whole. As for the outside linebackers, T.J. Watt had two tackles, while roster hopeful, Tuzar Skipper added four of his own along with yet another sack. Over to the inside linebackers. Vince Williams had two tackles and a sack. Rookie Ulysees Gilbert III didn’t jump off the screen, but he was still quite active, adding five more tackles to his preseason resume. It was a quiet night for Devin Bush, but he again looked like he belonged, while long-shot Robert Spillane stated his case with five tackles and a sack. Grade: A

Secondary
No Joe Haden again, but Steven Nelson continued to look like a more than solid free-agent addition as the other starting cornerback. It was another really good showing for Artie Burns, while rookie Justin Layne appeared to improve from his pro debut two weeks earlier. As for the safeties, Kameron Kelly had yet another active night with four tackles, while starting free safety Sean Davis added two before exiting with an ankle injury. Grade: B

Special Teams
The kickers were once again perfect, as Chris Boswell connected on an extra point, while Matthew Wright added a 31-yard field goal in the second half.

Ryan Switzer was the surprise kick-returner on the evening, averaging 19 yards on three returns, while also returning one punt for 20 yards. Grade: B+