The Pittsburgh Steelers extended their 2019 preseason winning streak to 2-0 with a 17-7 win over the Kansas City Chiefs at Heinz Field in Pittsburgh. Staff writer Tony Defeo delivers his Report Card where he pulls no punches as he “calls it as he sees it.” 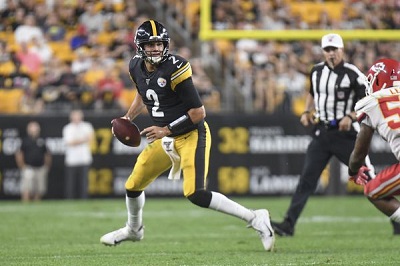 Quarterback
For the second-straight game, Ben Roethlisberger did not dress. Mason Rudolphstarted and played the majority of the first half. Like a week earlier, Rudolph looked much more confident and comfortable in Randy Fichtner’s offense. On the night, he completed 10 of 15 passes for 77 yards. His night could have been even better, had he not been victimized by some drops and fumbles.

Joshua Dobbs entered the game late in the second quarter and, much like last week, he found James Washington downfield on a 43-yard pass. Late in the first half, just one play after hitting Eli Rogers on a pretty 25-yard pass, Dobbs was intercepted in the end zone on a high throw that was intended for rookie Diontae Johnson. As for Devlin Hodges, the rookie from Samford entered the game early in the fourth quarter and completed just two of four passes. However, one of those passes was a pretty 24-yard touchdown to the rookie Johnson. Grade: B+

James Conner got the start, and put in a workman like performance, with six carries for 28 yards. Second-year man Jaylen Samuels looked really good, as he tallied four carries for 26 yards and a 14-yard touchdown. As for Benny Snell Jr., the rookie from Kentucky carried seven times for 16 yards. But even though it was another quiet night, he did look decent on blitz pick ups. Grade: B-

Wide Receivers
It was a quiet night for JuJu Smith-Schuster, who started the game but didn’t have any receptions. As for Washington, the second-year man continued to shine, tallying four receptions for 78 yards. Donte Moncrief, the veteran free agent pick-up fumbled the only pass that he caught on the night.

After missing the Buccaneers game with an injury, the rookie Dionte Johnson had a bit of a coming-out party, catching three passes for 46 yards and a touchdown. Johnson would have had another score, but it was called back on a very questionable offensive pass interference penalty. Eli Rogers kept his hat in the ring in the competition for the slot receiver role, with two catches for 31 yards. Grade: B

Tight Ends
Veteran Vance McDonald started and had just five yards on one reception that he fumbled out of bounds. Xavier Grimble didn’t do much to inspire hope that he can be the number two tight end, catching one pass for 13 yards and showing the old alligator arms while dropping another. Rookie Kevin Rader had two receptions for 20 yards, but he also committed a holding penalty. Grade: D

Offensive Line
Most of the starters played and put in a good night’s work. As for the work put in at right tackle by Chukwuma Okorafor, the second-year man from Western Michigan continued to struggle in his bid to win the swing-tackle job, and he was beaten badly on the Chiefs’ lone sack on the night. Grade: B

Defensive Line
There were no standout performers on the defensive line, but Stephon Tuitt started his first game of the preseason, while Javon Hargrave started his second. Rookie Isaiah Buggs recorded two tackles, while Daniel McCullers, the veteran whose job he could possibly take, did nothing noteworthy. Grade: C

Linebackers
Rookie sensation Devin Bush was held out of the Chiefs’ game for unspecified reasons, but the linebackers continued to shine, especially the outside linebackers. Starting his first game of the preseason, Bud Dupree may have had the best night of his career–preseason or otherwise–as he recorded three quarterback hits, two sacks and a pass defensed. He was a handful all night, as was T.J. Watt, who seemed to be in the backfield often and recorded two quarterback hits. As for Tuzar Skipper, the undrafted rookie continued to push for a spot on the roster by posting a sack and recovering a fumble. Mark Barron started again at inside linebacker and looked decent in pass coverage. Tyler Matakevich also started and led the defense in tackles with seven. He didn’t look so hot in pass coverage, as he had a hard time keeping up with Chiefs tight end Deon Yelder on a 25-yard catch and run. Rookie Ulysees Gilbert III had another active night, posting four tackles. Grade: A

Secondary
Joe Haden did not start. Veteran free-agent pick-up Steven Nelson did and looked decent in coverage. Surprisingly, so did fourth-year man Artie Burns, who started at corner, opposite Nelson. Burns had one pass defensed and forced a fumble while making a tackle in run support. Mike Hilton didn’t dazzle in pass coverage, but he was his usual disruptive self while blitzing. Cam Sutton recorded two tackles–including one for loss–but was victimized in coverage on Kansas City’s lone touchdown. As for the safeties, Sean Davis got his first start of the preseason, posting two tackles and recovering a fumble. Jordan Dangerfield posted two tackles, while Kam Kelly had one. Grade: B-

Special Teams
Chris Boswell didn’t have any field goal attempts on the night, but he did convert on both of his extra point tries. Matthew Wright connected on his lone field goal try from 46 yards away.

Jordan Berry averaged 45.7 yards on three punts, while Ian Berryman averaged 36 on two, downing one inside the 20.

It was a quiet night for kick-returner Johnny Holton, who averaged 36 yards on two returns. The rookie Johnson nearly fumbled while fielding his first punt and only tallied 11 yards on three returns. As for Diontae Spencer, he again looked like a real find, returning two for 49 yards–including one for 38. Grade: B

Unsung Hero
It’s hard not to go with Artie Burns for the night he turned in.