Tonight ESPN will air its documentary “The Return” chronicling Rocky Bleier’s return to Vietnam and the retelling of his incredible comeback story that began 50 years ago. Rocky Bleier is of course a central character in Black and Gold lore, and this is the perfect time to praise his contributions to the Pittsburgh Steelers’ story.

The Super Steelers were a national phenomenon. Growing up as the child of “Pittsburgh Expats” in the Washington DC suburbs, names like Mean Joe Greene, Terry Bradshaw, Lynn Swann, Franco Harris (although I thought his name was Frank O’Harris) and Jack Lambert were well known to me before Super Bowl XIII, which is the first Super Bowl I’m old enough to remember. 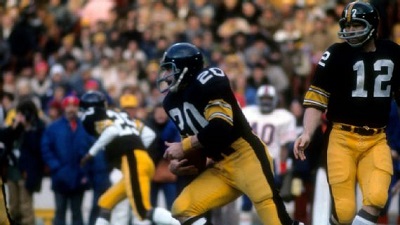 Yet the first time I remember hearing Rocky Bleier’s name was in the living room of my grandparent’s house in Baldwin, when my grandpa Bill saw me wearing a Steelers shirt and asked, “Are you a Steeler? Which one are you? Rocky Bleier?”

But it was only a year later that I learned of Rocky Bleier’s story. A day or two after the Steelers win over the Rams in Super Bowl XIV, at breakfast my mother mentioned to me that she’d heard Lynn Swann going out of his way to praise Rocky Bleier’s touchdown in the Super Bowl.

“What touchdown in the Super Bowl?” I quizzed. Franco, Swann and John Stallworth had scored touchdowns in Super Bowl XIV, but Rocky Bleier hadn’t.

My mom explained that Swann had made the comment after watching tape from Super Bowl XIII, remarking that there was no way Bleier should have been able to run fast enough or jump high enough to make that play. (Here’s a clip of the play, available as of 8/20/2019. Watch now before Goodell’s YouTube police get it):

“Why?” I inquired? And then my mother explained about Rocky Bleier’s backstory of having to fight back after being gravely wounded in Vietnam. My mom’s story made an impression on me. However, learning more about Bleier’s comeback would have to wait.

In December 1980, ABC aired, Fighting Back: The Rocky Bleier Story. The show was heavily hyped and I really wanted to watch it. I did get to see the beginning and remember watching until the scene where Bleier gets wounded.

My mom promised me that it would be on again as a rerun in the summer, when getting up for school wouldn’t be an issue. Yet if ABC aired Fighting Back: The Rocky Bleier Story that next summer, I never saw it. Nor did I ever see it on any other occasion.

While I admit to feeling deprived over that for far longer than I should have, that has passed. I simply share this as a reminder of how different things were before we had VCRs, DVRs and viewing on demand (the movie is now available on YouTube, although I haven’t watched it; alas I have no time.)

I can remember reading a Steelers Digest article about that told how Rocky Bleier went to practice even after Chuck Noll cut him. I’ve never seen that factoid repeated elsewhere, but in his book From Black to Gold, Tim Gleason recounts how Art Rooney Sr. intervened after Noll cut him to move him to IR, allowing Bleier to remain on the Taxi Squad.

Andy Russell also discussed Rocky Bleier’s comeback in his book A Steeler Odyssey, recounting how Bleier had been told by both Army and team doctors that his professional football career was over.

Rocky Bleier trained religiously, making the team in 1972, carving out a role for himself on special teams in 1973, and by 1974 he established himself as the starting halfback alongside fullback Franco Harris. As Dick Hoak told Gleason, “’He was quite an inspiration. He did something unheard of, he actually improved his speed significantly. That’s how hard he worked.’”

When Chuck Noll made his game plan for Super Bowl IX, he scripted an off tackle run by Bleier as the Steelers first play against the Vikings Purple People Eater Defense. As Gleason points out, Bleier ripped off an 18 yard run at one point in the season – which clocked in at 1 more yard than the entire Vikings rushing total for the game.

In 1976, Rocky Bleier ran for 1030 yards, during a 14 game season, which complemented Franco Harris’ 1128 yards, making the duo only 1 of six tandems to pull off twin 1000 yard rushing efforts in a single season. 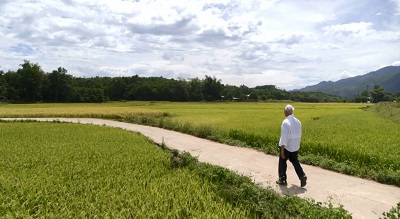 Rocky Bleier was one of the first Super Steelers to seek out his “Life’s Work,” as he retired after the 1980 season. Since then Bleier has remained in Pittsburgh, actively working to support veteran’s causes and serving as a motivational speaker.

No one will question why. Although only those who’ve experienced the terrors of war first hand can probably truly understand, how gut wrenching the trip must have been for Rocky Bleier.

But fortunately, Rocky Bleier never allowed those horrific events of August 20th 1969 to define him, either physically, mentally or spiritually. And the dedication, perseverance and faith that sustained Rocky Bleier during his comeback is a lesson everyone both understand and learn from.