Steelers’ rookie first-round pick Devin Bush was the star of a training camp highlight over the weekend, when he got the best of fellow rookie Benny Snell Jr. in a backs on backers drill.

If you watch the video linked to the first paragraph, you’ll see that Devin Bush took Benny Snell, a fourth-round pick who earned a reputation at Kentucky as a hard-nosed running back who liked to run downhill, and drove him about five yards backwards before depositing him on his, well, backside.

As a long-time observer of the team, I saw what Devin Bush did and the first thing I thought was that he needed to win just about every backs on backers battle he could against a rookie running back. 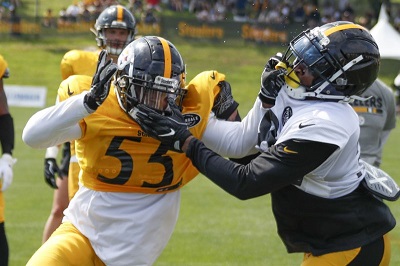 Sure, Devin Bush, an inside linebacker from Michigan, is a rookie in his own right, and he’s out there learning just like every other player at his first NFL training camp. But it’s a little different for Devin Bush.

That’s a huge departure for a Steelers front office whose draft day philosophy is usually to stand pat and let the chips fall where they may. But the Steelers couldn’t wait and hope that Bush fell to them (that would have been a minor miracle, anyway), not this year, not with what he could possibly mean to their defense.

And that brings me to what Bush is just days away from facing: a stadium full of Steelers fans who will have the same expectations of Bush that I do when Pittsburgh takes on the Buccaneers this Friday night at Heinz Field in the first preseason game of 2019.

Sure, it’s only an exhibition, and for most of the veterans, it will be a glorified practice and a way to get some more work in (that is, if they even play at all). As for the other rookies and younger players–many of whom are already on the brink of having to get on with their life’s work–yes, the pressure will be on. It will be do or die, perhaps the one and only time they’ll be able to leave a strong and lasting impression on their bosses.

However, this does not mean Devin Bush won’t be feeling the pressure to perform and to perform well, staring this Friday. You see, about 120,000 eyes will be trained on his every move for every second that he’s in the game. Why?

If he is truly the real deal–if his speed, explosiveness, athleticism, play-making ability, leadership and high football IQ can make a seamless transition from the college ranks to the professional level–Pittsburgh’s defense may have its replacement for Ryan Shazier, who was lost near the end of the 2017 campaign with a spinal injury that he’s still not fully recovered from.

Ryan Shazier was everything to the Steelers defense, which is why the team drafted in him out of Ohio State in 2014. Shazier battled the injury bug over the course of his four-years as the center of the Steelers defense, but when he was healthy, there was no question he was central to its every move.

You saw that in the very wild wildcard victory over the Bengals following the 2015 season, when Shazier spent the entire game wreaking havoc on the Bengals offense before rescuing the Steelers season in the final seconds with a forced fumble just one play after backup quarterback Landry Jones nearly threw it all away with an interception.

Shazier was the guy who did all the heavy lifting for Keith Butler’s unit. The entire defensive game-plan was schemed around him and his ability to pursue, to make things happen just about anywhere on the field.

It was to no avail, as Spence, a third-round pick in 2012 who spent his first incarnation as a Steeler trying to rehab from a devastating knee injury, wasn’t anything close to what the Shazier-lacking defense needed him to be.

The Steelers defense, a unit that’s spent the better part of this decade trying to recapture the magic from the previous decade, had its moments in 2018. But it didn’t have that explosive play-maker in the middle to bring everything together.

As for Vince Williams, a sixth-round pick in 2013, despite being a self-made man who has gotten every single ounce that he can out of his abilities, he wasn’t the same without Shazier by his side.

The Steelers’ had a lot of young and promising talent on defense as they entered the 2019 offseason, but they didn’t have someone who could bring it all together.

Now, maybe they do.

We’ll soon begin to find out, starting this Friday night. Yes, it might only be preseason, but not since Ben Roethlisberger started his first regular season game for an injured Tommy Maddox back in 2004 have expectations for a Steelers rookie been this high.

The world won’t be watching as Devin Bush makes his debut this Friday, just Steeler Nation, but how he performs could make a world of difference for the team’s immediate future.