A lot can change in 2 and a half weeks in Steelers Nation. The Steelers ugly season opening loss to the Patriots came ahead of a business trip that would keep me off line and unable to write for 2 weeks. As on cue, all hell broke lose (more on that at the end.)

But, as I pointed out after James Harrison got cut during my first Christmas in the US in 17 years, sometimes not being able to blog is a blessing.

Here go my reactions in sequence. 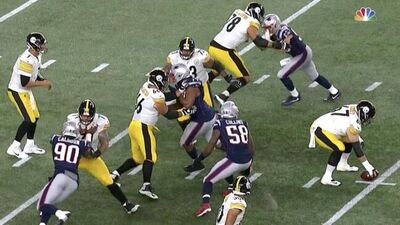 I drank the Kool Aid. On paper, the Steelers 2019 squad was better than the 2018 squad that defeated the Patriots last December. And those Patriots had the look of a ’79 Steelers type squad to me – a dynasty enjoying its last roar before falling and fading. Plus the Steelers looked really good in preseason.

I don’t know that I expected a win, but I did expect the Steelers to fight tooth and nail and for the game to go down to the wire.

They really came out flat in all three phases.

But it was only week one, we were told….

I’m a sucker for underdogs like Joshua Dobbs. I was rooting for him since the day the Steelers drafted him. Yet, based on everything I read and what little I saw, he seemed to hit a plateau during the 2019 preseason campaign, and there was no question that Mason Rudolph should back up Ben Roethlisberger.

So the Steelers trading him for a 5th round pick seemed to be a smart move, even if it did depart from the Franchise’s core philosophy of always keeping 3 quarterbacks.

Besides, an extra 5th round pick would bolster their depleted capital going into the 2020 NFL Draft….

So there I was, handing out tickets to the San Francisco Giants game, blissfully unaware of anything happening as the Steelers were playing the Seahawks, on the other side of the country.

At about the 6th inning I made it up to the luxury box my company had rented. I sit down, crack open a drink, scan the TV showing NFL scores, and I see Mason Rudolph’s passing numbers!

It didn’t take too long to find out that Ben Roethlisberger had left the game injured and that the Steelers had suffered yet another loss.

Well, we always knew that Ben Roethlisberger could suffer a season-ending injury, and now it has happened.

I’m sitting there at a trade show, and I see a tweet from the Mexican Steelers WhatsApp group saying the Steelers have traded their 2020 1st round draft pick for Minkah Fitzpatrick.

Well, it wasn’t wrong, it was right.

This one leaves me with mixed feelings. The Steelers philosophy of building through the draft is one that has served the franchise well. Just look at those 6 Lombardi’s and its overall outstanding record since 1969. Sure, Bobby Beathard built two and a half Super Bowl championship teams by trading draft picks for proven players.

Seeing the Steelers trade away a 1st round draft pick at the beginning of week three is kind of like trying to pen a love letter to your wife with your left hand. It just feels WRONG.

Steelers history junkies can look at how the Steelers defense cratered in 1988 when Cornell Gowdy manned the strong safety spot between Donnie Shell’s retirement and Carnell Lake’s arrival via the 1989 draft.

The Steelers do not play for draft position, and that philosophy has served them well. Bill Austin supposedly screwed the team by not losing enough in 1968 therefore depriving Pittsburgh of a shot at drafting O.J. Simpson. Chuck Noll had to settle for Joe Greene instead.

How did that turn out?

Beyond affirming the franchise’s commitment to winning, the Steelers also get Minkah Fitzpatrick at a very salary cap friendly contract for 2 years plus the 5th year option.

Just to keep things interesting, the Steelers then went and traded away one of those 5th round picks for tight end Nick Vannett.

The Steelers gambled going into 2019 that 1. Vance McDonald’s relative health in 2018 would continue. 2. That Xavier Grimble was ready to be a true number 2 tight end.

We’re only 3 weeks into the season, and Vance McDonald has already missed action in multiple games. Xavier Grimble is probably a serviceable number 3 tight end, but he looked in over his head as a legit number 2, and certainly doesn’t seem capable of being a number 1. Besides, he’s hurt.

The Steelers made a move they had to make, but it came at the expense of yet another draft pick.

A lot can change in two weeks in Steelers Nation, but one constant remains: When I am unable to write, big things happen. Here’s a quick summary:

Yes, a lot has changed in the last two weeks. But somethings remain the same.