So much for the Steelers catching the Patriots at just the right time, huh?

Tom Brady completed 24 of 36 passes for 341 yards and three touchdowns, as the Steelers opened up their 2019 regular season with a 33-3 blow-out loss at Gillette Stadium.

The Steelers defense started the game by forcing a New England punt; after that, it was all offense all the time for the Patriots, as they scored on seven of their next eight possessions.

Like they normally do, the Patriots methodically built a 10-0 lead midway through the second quarter. Needing to establish momentum, Pittsburgh’s offense faced two key short-yardage situations. 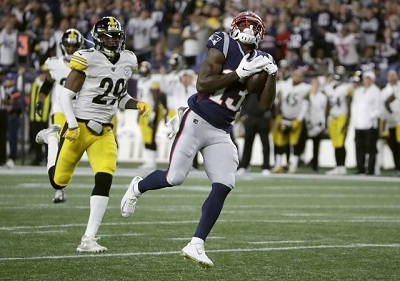 The first came with 7:46 left in the second quarter. Facing a third and one from their own 44, the Steelers tried a pitch out to running back James Conner, who subsequently lost four yards, forcing a punt.

Not surprisingly, the Patriots marched 80 yards on eight plays and took a 17-0 lead with a 25-yard touchdown pass from Brady to Phillip Dorsett III.

The Steelers were faced with another short-yardage situation on their following drive–this time a fourth and one from the New England 47. Unfortunately, Donte Moncrief couldn’t hold on to a catchable pass, and the Patriots closed out the quarter with a Stephen Gostkowski 41-yard field goal to make it 20-0 at the half.

The Steelers had their best drive to open the second half, with the key play coming on a 45-yard pass from quarterback Ben Roethlisberger to receiver James Washington that set the offense up at the New England 18. One play later, Moncrief dropped another catchable pass in the end zone. Five plays later, the Steelers faced a third and goal from the one, but a fade pass from Roethlisberger to Moncrief fell harmlessly incomplete. Instead of going for it, however, the Steelers settled for a Chris Boswell 19-yard field goal to make it 20-3.

For the night, Roethlisberger completed 27 of 47 passes for 276 yards and one interception. Juju Smith-Schuster, in his first game as the team’s number one passing target, had six catches for 78 yards, while Washington caught two for 51 yards. As for Moncrief, he did manage to catch three passes, but for just seven yards.

As for the Steelers defense, it looked as helpless as ever against Brady and Co., as it allowed 465 total yards. The Patriots were seven of 14 on third downs, and Brady was only sacked one time.

Next up for the Steelers is the home-opener at Heinz Field, as the Seahawks travel to Pittsburgh for a 1 p.m. kickoff next Sunday afternoon.