Taken from the grade book of a teacher dismayed that his pupils STILL haven’t learned that practice makes perfect, here is the Steelers Report Card for the latest loss to the Patriots at Gillette Stadium. 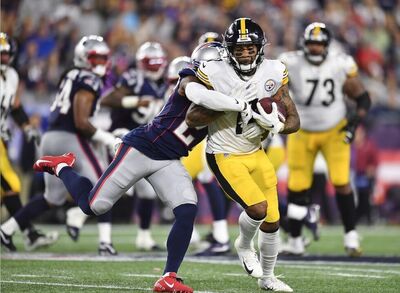 Quarterback
No sugar coating here: Ben Roethlisberger looked every bit the quarterback who had thrown 13 passes in the preseason. He was out of synch with receivers. This was brutally evident on several long balls, but he also tried to force a slant route that should have been a pick six. Ben Roethlisberger was far from the only culprit this night, but he says “He needs to play better.” Agreed. Grade: F

Running Backs
With the way the game evolved neither James Conner nor Jaylen Samuels had much of a chance to get going. Both made some catches, but these were not factors. And the run blocking wasn’t there. Grade: C-

Tight Ends
Word has been that to protect his health, the Steelers were going to keep Vance McDonald on ice. Well, they certainly did that. Vance McDonald didn’t get into the action until garbage time where he caught 2 passes for 40 yards, Xavier Grimble was invisible and Zach Banner didn’t get work as a third tight end. Grade: B

Wide Receivers
JuJu Smith-Schuster first game as the Steelers official number 1 WR drew mixed results. JuJu managed to make some nice catches, but didn’t approach being a game changer. In contrast, Donte Moncrief led the team in targets and looked terrible. James Washington could have had a game-breaking play, yet lost his balance. Ryan Switzer caught 6 of 6 balls thrown to him, but that merely highlights how well covered the rest of the WRs were. Grade: F

Offensive Line
Credit the offensive line for giving Ben Roethlisberger time to throw. There were several times when Ben had too much time no one was open. However, the offensive line’s run blocking was atrocious. 3 times in the first half the Steelers faced 3rd and 1 or 4th and one and failed to convert. Making those conversions could have at least altered the dynamics of the game. Instead, the Steelers lost the battle of scrimmage. Grade: F

Defensive Line
The Patriots had some success running the ball early in the game that put them in 3rd and short situations, which they converted. That’s not all on the defensive line, but it starts there. The Steelers couldn’t get pressure on Brady consistently, and if you give Brady time he will burn you. And Brady burned the Steelers. Yet again. Grade: F

Linebackers
Bud Dupree had a sack. Vince Williams, Mark Barron and Devin Bush split time inside. The linebackers got some pressure on Brady on a few odd occasions, but that was too little too late. Brady decimated the Steelers with the short passing game and while that’s not all on the linebackers, they shoulder some of the blame. Grade: D

Secondary
Any one want to question Sean Davis’ value? Kameron Kelly got his first start and looked every bit the like an AAF retread. Terrell Edmunds made a few nice plays but nothing to indicate he’s about to make the 2nd year leap. Steven Nelson’s name wasn’t heard much, which is good. Joe Haden did not appear to make any egregious mistakes. But Tom Brady passed for 341 yards and six touchdowns while converting 7 third downs. The totals could have been double had the Patriots passed more. Grade: F

Special Teams
On the positive side, Chris Boswell made his one attempt and Jordan Berry boomed off several long punts. Ryan Switzer returned no punts and was average as a kick returner. But the Patriots returned two punts for 35 yards. That was hardly a decisive factor, but it does show just how much things went wrong. Grade: C-

Coaching
At half time Mike Tomlin told NBC that lack of execution was the issue. He was right. To wit, if the Steelers can force a 3 and out after kicking a field goal and then score a touchdown to open the second half, they’re very much in the game.

The New England Patriots were in championship form. The Pittsburgh Steelers looked like they were still playing preseason. Judging by the tone of coverage of reporters who’ve been watching the team daily for the last two months, Pittsburgh’s piss poor performance surprised them as much as it did the fans.

Yet here we are again in early September, and the Steelers aren’t simply failing to execute, failing to adjust, they’re also not playing with any confidence or poise.

It matters not. The Pittsburgh Steelers were woefully unprepared for Prime Time. And that’s on Mike Tomlin. Grade: F

Unsung Hero Award
If there was one brightish spot for the Steelers, it came in the form of T.J. Watt who got in Tom Brady’s face and was easily the most impactful and consistent defender and for that he wins the Unsung Hero Award.