A lot has happened since our last Watch Tower. Today we focus on Ed Bouchette’s big move, war stories from the Steelers draft room, Boswell’s bonus and more. 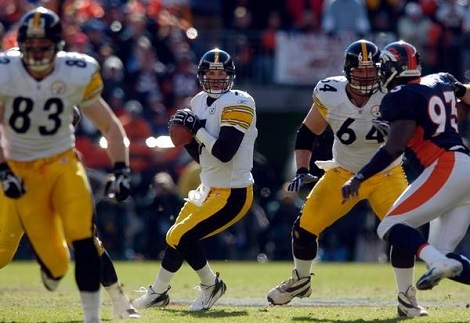 Bouchette Bolts the Post-Gazette for the Athletic

This spring the Steelers press corps experienced a seismic shift when veteran reporter Ed Bouchette left the Pittsburgh Post-Gazette for The Athletic.

To provide context, let’s borrow from Bouchette’s The Dawn of a New Steel Age, which covers the transition from Chuck Noll to Bill Cowher. Bouchette opened his book by observing that Pittsburghers were likely certain about four matters:

The Allegheny and Monongahela would meet to from the Ohio. A parade would clog the Boulevard of the Allies on every obscure holiday. The most memorable moment in baseball history had occurred in Oakland – Pittsburgh’s Oakland.
And Chuck Noll would coach the Steelers.

Had someone else penned the above lines, they certainly would have added: “And Ed Bouchette would cover the Steelers for the Post-Gazette.” That’s changed, and Bouchette has explained that The Athletic simply made him an offer he couldn’t refuse.

The Watch Tower reached out to Bouchette to talk about his time at the Post-Gazette, his experience at The Athletic and trends in sports journalism.

He reminded us of “…a long piece on Carlton Haselrig and his AWOL days from the Steelers that won the AP best sports story of 1996.” He also brought up an award winning piece on Merril Hoge’s fight with cancer, and cited a 1985 story about Rocky Beleier’s (legal and medically supervised) steroid use, which “caused quite a stir at a time when ‘steroids’ was becoming a four-letter word in the NFL.” 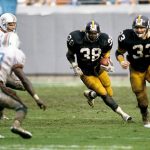 Bouchette also cited a non-Steelers story he penned in 1990 on Jackie Robinson and Curt Roberts, the Pirate’s first black player, whom he described as “a fellow no one was celebrating as the first until my story.”

When asked if there was a story that he wished he could have back, Bouchette was coy but conceded he “once wrote a story early in a season about the Steelers being on pace to set some record for team stats except I had my math wrong and they really weren’t. I’d like a do over on that.”

As a self-described “old newspaper guy,” Bouchette argues that the shift away from print is inevitable, sharing that, “As Jerome Bettis once told me — when we were bowling together — it’s a game of adjustments. You can apply that motto to many things in life, not just games.”

In terms of how the all-digital format impacts his work, Bouchette shares that his writing was trending towards being more analytical at the Post-Gazette. But “The difference at The Athletic is they have no advertising and don’t depend on ‘clicks’ but on subscriptions, and subscribers mostly understand what they are getting — not necessarily “news” that the fifth-round pick just signed, but perhaps what that fifth-round pick can mean for the team if he develops.”

And while Bouchette doesn’t make this leap, his last quote prompts the Watch Tower to suggest that subscription-based services could be an antidote to striking a better quality-quantity balance in sports journalism.

In the past, the Watch Tower commented commented on the lack of stories from inside the Steelers draft room during the Cowher and Tomlin eras in contrast with the Noll era.

But that doesn’t change public hunger for peeks inside the Steelers draft room. Fortunately a couple of veteran Steelers writers have supplied a few glimpses. 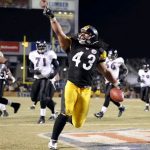 The first came from Steel City Insider’s Jim Wexell. In a March Message Board exchange about the draft and free agency, Wexell offered this: “And a note on drafting playmakers, if the Steelers hadn’t traded up to draft Troy, they likely would’ve drafted the guy Cowher really liked at 27 – Alonzo Jackson.”

Trading up for Troy Polamalu in the 2003 NFL Draft is likely the 2nd most important decision the Steelers made that contributed to victories in Super Bowl XL and Super Bowl XLIII. In contrast, Alonzo Jackson is probably Kevin Colbert’s worst 2nd round pick.

Yet this is the first time to the Watch Tower’s knowledge that any journalist has reported that the Steelers could have taken Alonzo Jackson in the first, and for that Wexell wins Watch Tower kudos.

Yet, Wexell isn’t the only veteran journalist to enrich the narrative surrounding the Colbert-Cowher drafts.

Revisiting the Decision to Bring Big Ben to Pittsburgh

One story from the current era that is well known details how the Steelers came to draft Ben Roethlisberger in the 2004 NFL Draft. As Dan Rooney recounted in his 2007 self-titled autobiography, after Philip Rivers and Eli Manning went off the board, talk in Pittsburgh focused on Sean Andrews, an offensive lineman.

Ed Bouchette wrote a detailed article about the 2004 NFL Draft in The Athletic where he got Bill Cowher on the record as saying, “ ‘That really is not the true story,’ Cowher said. ‘Mr. Rooney never mandated me to do anything.’” 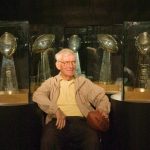 That story, however interesting, would probably not have remained the Watch Tower’s radar screen were it not for a comment tucked in at the end of a mini-camp notes column by Jim Wexell. Wexell, as he’s wont to do presented a “historical nugget” where he observed:

Back in the 2004 draft, the Steelers were on the clock with the 11th pick and were debating between QB Ben Roethlisberger, OG Shawn Andrews and an unidentified third prospect. Owner Dan Rooney, of course, is credited with swinging the debate toward Roethlisberger, but what did Rooney say exactly?

Nothing. He put his right hand up near his right ear and flicked his wrist three times to mimic the act of throwing an imaginary ball. So, the Steelers took Roethlisberger.

A debate ensued between Jim Wexell and “jujumojo” on his message board, where Wexell acknowledged the Bouchette article while reaffirming his belief in the accuracy of Dan Rooney’s account.

Journalists who speak with different sources (at different times) are going to tell diverging stories. Just look at the contrast to how Antonio Brown’s departure was portrayed in Pittsburgh vs the rest of the NFL. Ultimately, readers must decide on which account is more accurate.

Which is to focus on who is begin quoted, directly, on the record. If you have access to The Athletic then the Watch Tower advises you to re-read Bouchette’s story with a close eye to the direct quotes attributed to the subjects.

If nothing else you’ll find a new nuance to the narrative that you may have (or at least I) missed on the first go around.

Chris Boswell will return to kick for a 5th consecutive season in Pittsburgh. But we also know this was far from a pre-ordained conclusion during the 2019 off season.

Art Rooney II made little attempt to hide his dissatisfaction with the Steelers kicking game, and earlier this summer, both Ed Bouchette and Gerry Dulac reported that the Steelers had indeed forced Boswell to agree to delay his 2 million dollar roster bonus until the tail end of the preseason.

Both Bouchette and Dulac deserve credit for confirming this, but the real credit or breaking the story belongs to Ian Whetstone, Steel City Insider’s capologist.

Looks to me like the Steelers may have made some kind of modification to Chris Boswell's contract. It didn't affect his base salaries, but there may be a change associated with his $2 million roster bonus. Could be as simple as moving the due date, which would have been soon.

Whetstone made this observation in mid-March based on careful evaluation of Steelers salary cap figures and he was not only right, but ahead of everyone else.

And for that Ian Whetstone wins Watch Tower kudos.