Kinda of like “Midway” on the Pennsylvania Turnpike, the Steelers 2019 bye week didn’t arrive in the middle of the season, but it still provides convenient point to assess what we’ve learned about the team so far.

Heading into the season, the Steelers needed to affirmatively answer two key questions:

The easy responses are “No” and “Yes,” but after six games, honest answers evade both questions.

At first glance, the Steelers offense resembles a struggling, shell of its former self. Numbers don’t lie. The Steelers offense ranks near the bottom by any number of measures. Opposing defensive coordinators don’t lose sleep before playing Pittsburgh. They might fret over pressuring the quarterback, but this offense scares no one.

Sure, JuJu Smith-Schuster is frustrating fantasy owners, and James Conner isn’t running with the authority that he ran with last season. But starting 3 quarterbacks in 6 games yields a limited and unrepresentative sample. The reality remains that its far too early to write off the Steelers offense.

New arrivals such as Steven Nelson, Devin Bush Jr. and Minkah Fitzpatrick have improved the unit. Keith Butler’s defense has been both harassing quarterback AND taking the ball away, and they’ve been executing those splash plays at critical moments in games (See Bud Dupree’s strip-sack vs the Bengals.)

But can the Steelers defense sustain this? Arguably, the unit has lost its best player, Stephon Tuitt for the year. Stephon Tuitt was dominating opposing offenses and which paved the way for the Steelers to “Get there with four” when rushing the quarterback.

But the same could have been said back in 2017, when the Keith Butler’s boys flirted with dominance in games against the Chiefs, Bengals and Lions only to end the season as unit that needed several Chris Boswell last minute saves in the regular season, and came up flat footed against the Jaguars in the playoffs.

To put it in Yoda speak, “Look good the Steelers defense does. But six games does not a dominating unit make.”

So if we can’t say much with a lot of confidence about the Steelers offense and defense thus far in 2019, what is it that we can say? 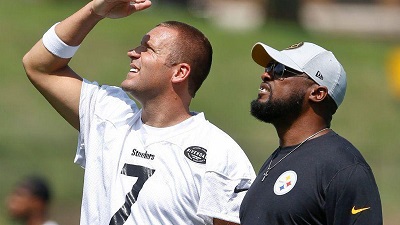 This shouldn’t surprise anyone who has been paying attention for the last 3-4 years. While he wasn’t involved in management of the team, Art Rooney II certainly remembers what it was like to have Cliff Stoudt, Mark Malone, David Woodley and Bubby Brister starting at quarterback.

That fueled decisions as far ranging as forcing Todd Haley out, to extending Ben Roethlisberger’s contract at age 37 to paying a premium to move up to draft Devin Bush Jr. in the 2019 NFL Draft. What has changed however, is Roethlisberger’s health.

Trading a 1st round draft pick cuts against the franchises DNA. But the fact is that Minkah Fitzpatrick can do a lot more to help the Steelers win a Super Bowl in 2020 than someone they might draft.

Its a plan that could payoff masterfully….

…But only if Ben Roethlisberger returns in franchise form.