Taken from the grade book of a teacher who is marking himself down a full letter grade for being so late, here is the Steelers Report Card for the win over the Bengals on Monday Night Football. 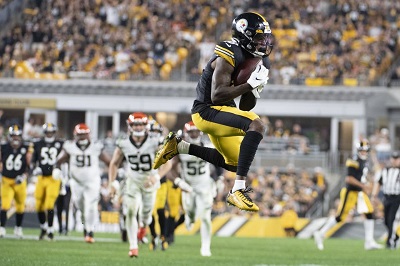 Quarterback
Mason Rudolph’s first start yielded a video game like passer rating of 124.6 as he completed 24 of 28 for two touchdowns and zero interceptions. But those numbers are a product of play calling designed to protect him. Rudolph made a few mistakes, but he also flashed some impressive play making potential. Grade: B-

Running Backs
James Conner had the best night of the season by far, running for 4.2 yards per carry on 10 carries, and catching 8 passes. What was most impressive was the grit and determination which drove Conner, evident on his touchdown catch and another Red Zone carry. Jaylen Samuels operated the Wildcat for the Steelers to great effect. It was an unconventional evening for the Steelers, but one that worked. Grade: A

Tight Ends
Zach Gentry saw his first extended NFL action, and made a tremendous block on Jaylen Samuels touchdown. His effort combined with that of the other tight ends was critical to the Steelers success. Grade: A

Wide Receivers
Any game plan that only sees JuJu Smith-Schuster targeted 4 times does not, by definition, feature the wide receivers. Diontae Johnson may have benefitted from a blown coverage, but if he continues to score touchdowns on deep passes, he will force opposing defenses to take note. James Washington remains nearly invisible in the Steelers offense, which is beginning to get worrisome. Grade: C+

Offensive Line
By his own account Mason Rudolph wasn’t touched. That’s saying something given that he tends to hold on to the ball a little longer than he should. The Steelers run blocking was better, as the line was particularly effective in springing the running backs on outside runs. Still, the failure on 4th and short is disturbing. Grade: B-

Defensive Line
Cam Heyward spoke loudly during the week about the need for everyone to step up, and he spoke even louder on the field with 2.5 sacks, 2.5 tackles for losses and 3 quarterback hits. All on an injured quad. Javon Hargrave got a sack and Stephon Tuitt hit Andy Dalton twice. An excellent night for the defensive line. Grade: A

Linebackers
Mark Barron ended the Bengals first entrance into the Red Zone by defending a pass and his interception blotted out any chance of a Bengals comeback. Devin Bush had his first sack and dropped 3 ball carriers for losses. T.J. Watt had a sack and a half, 3 quarterback hits and recovered the fumble on Bud Dupree’s strip sack that ended another Cincinnati trip to the Red Zone. The Bengals tight ends were a non-factor. Grade: A

Secondary
Mike Hilton was swatting passes like flies. Joe Haden almost had an interception. Minkah Fitzpatrick, Terrell Edmunds and Steven Nelson’s names weren’t heard much all of which were good signs. The Steelers front seven put the Bengals in several 3rd and long situations, and they only converted 5 of 17 of those, which is on the secondary. Grade: A 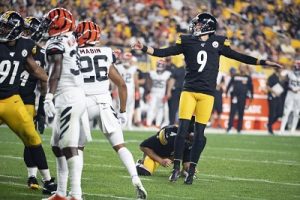 Coaching
Keith Butler has taken a lot of grief for a long time. Much of it is understandable. The Steelers have 7 first round picks playing for them, and performance has not matched the investment of draft free agent capital.

Sure, right now Cincinnati looks like the NFL equivalent of a Junior Varsity team, but the Steelers defense should dominate under those circumstances. They dominated.

Randy Fichtner’s took a lot of heat before the game for his vanilla game plan against San Francisco, and then took heat for resorting to the Wildcat and other gimmicks to beat The Bengals.

The Steelers were playing without their fullback, without their number 1 tight end and with a first year starting quarterback in search of his first win. What was Randy Fichtner supposed to do? Alternate between the Wishbone and Run’n Shoot?

Things get pretty bleak when you’re 0-3 NFL team, yet Mike Tomlin kept his players focused and did not shy away from innovating. Grade: A

Unsung Hero Award
Six days before the Monday night game, this gentleman wasn’t even wearing a Steelers uniform. When he arrived in Pittsburgh, he informed that the Steelers had been trying to get him in the Black and Gold for some time.

Now we know why. He literally walked in off the street to start for the Steelers in this game, and he made two critical catches as well as contributing to the blocking game. For that Nick Vannett wins the Unsung Hero Award for the Steelers Monday Night win over the Bengals.