The Steelers 27-3 win over the Bengals on Monday Night Football delivered Pittsburgh a much needed win. But days later debate continues over just what the win actually means.

The answers to the questions are, Maybe, No, and Yes. 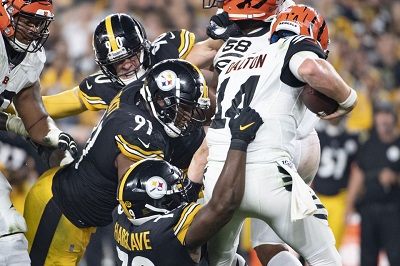 The Steelers season opening loss against the New England Patriots was disturbing on so many levels. The most disturbing facet of the loss wasn’t captured on the stat sheet. Pittsburgh’s latest loss in New England was so unsettling because the Steelers didn’t look like they belonged on the same field as the defending Super Bowl Champions.

Pittsburgh’s performance picked up in losses to Seattle and San Francisco, but the offense remained out of synch and the defense surrendered 2nd half leads twice.

After the Steelers defense forced a punt, Diontae Johnson fumbled the ball away at the 15 yard line two plays into the first drive of the night.

The Steelers defense refused to flinch. Andy Dalton threw two incomplete passes while Mark Barron batted away the third. Mark Barron had been a disappointment thus far. He stepped up. He was the first of many to do so.

Although it forced Cincinnati to settle for three points, the game didn’t turn on Mark Barron’s third down play. It did however, set the tone for the night.

While the Steelers didn’t pull away until the 2nd half, it was clear even in the 1th quarter that players were stepping up. Both Cam Heyward and James Conner went to the sideline with injuries. Both came back to make big plays.

Those ladies and gentleman are examples of leading with your actions. Many others followed suit.

The players were not the only ones to step up. Randy Fichtner took a lot of criticism for the Steelers game plan against San Francisco. Many suggested his play calling failed to account for the fact that his signal caller was Mason Rudolph and not Ben Roethlisberger.

Those critiques may be fair or they be unfair, but the fact remains that the Steelers defense secured multiple turnovers which the offense failed capitalize on.

The Steelers offense was far more prolific against the Bengals, but Tuesday morning Fichtner still found himself facing criticisms that the Wildcat and Jet screens represented “play ground football” that could never be sustained.

That is probably true. Don’t expect Baltimore to be caught flat footed by such gimmicks.Indeed, Mike Tomlin has as much conceded that the steady diet of the Wildcat won’t be sustainable for the Steelers. But that is not important.

What is important is that the Steelers offense needed a spark, and Randy Fichtner found a way to provide one.

The Road from Here Starts with Ravens

Sometimes, as in ’93 and ’02, those early season wins over the Bengals helped spark bigger things for the Steelers. At other times, such as 2003, those sparks faded into oblivion as the calendar turned to October.

Confidence can be contagious. Can the Steelers sustain it? The Baltimore Ravens will be the first to test their resolve.