With Mason Rudolph and Jaylen Samuels ruled out for Pittsburgh’s Sunday Night Football matchup against the Chargers, the Steelers cut Fred Johnson and Jayrone Elliott and activated Trey Edmunds and Paxton Lynch.

While there was some hope that he could play, as of this writing Mason Rudolph remains in the NFL concussion protocol. Rudolph could still be cleared, but the Steelers will start Devlin Hodges with Paxton Lynch backing him up. 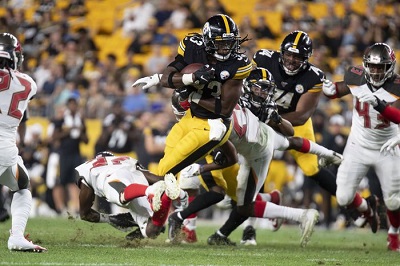 This amounts to a minor bit of irony, as Paxton Lynch was the Denver Broncos first round pick in the 2016 NFL Draft, while Devlin Hodges spent opening day browsing the want ads after spending the summer on the Steelers training camp roster.

Trey Edmunds, brother of Terrell Edmunds, has been with the Steelers since early 2018, after joining the practice squad when Le’Veon Bell began his hold out. The Steelers activated Trey Edmunds last season when James Conner got hurt. Edmunds appeared in 4 games on special teams but did not get a carry.

Trey Edmunds will backup James Conner and Benny Snell Jr., but could see action in the offense. Edmunds is a fullback by trade, and Roosevelt Nix has been declared out of the game.

Steelers Hope to Bring Back Johnson and Elliott But….

According to Chris Adamski of the Pittsburgh Tribune-Review, the Steelers plan to bring back both Jayrone Elliot and Fred Johnson. That could very well happen, but the Steelers have had a bit of bad luck with cutting and resigning roster bubble players this season.

Before opening day the cut preseason stand out Tuzar Skipper, when they activated Johnny Holton, only to lose him on waivers to the New York Giants. They also planned to bring back wide receiver/kick returner Diontae Spencer to the practice squad, but he got claimed by the Denver Broncos.

Fred Johnson’s play in preseason was strong enough that some in the organization see him as a potential future starter. Given the aging Steelers offensive line and the dearth of draft picks to replace them, the Steelers need to stockpile potential where they can.

Finally, Steelers free agent corner Steven Nelson will not play, leading Artie Burns to see his first extended action since the beginning of the 2018 season.