The 2019 regular season is four weeks old, and the Steelers are 1-3 and without their best player, quarterback Ben Roethlisberger, for the remainder of the year.

And that’s why, regardless of the hope one may have that the Steelers can actually recover from this shaky start and compete for the AFC North crown, how legit can they really be without their best and most important player?

Fair point. The position of quarterback is essential to success in the NFL. And when a quarterback’s status and level of play is truly at the franchise level, how he goes is how his team goes, and if he goes down….look out below! 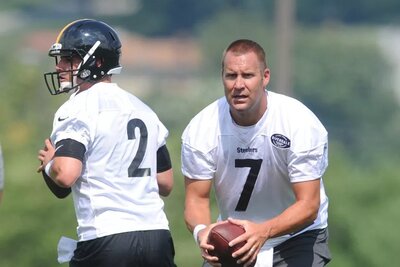 However, you might also say that, when discussing the position of quarterback, it’s all relative. What I mean by that is, where do the other franchise quarterbacks reside in the AFC in 2019?

Obviously, the great Tom Brady lives in the weak AFC East. The heir apparent to Brady’s throne as the most dominant quarterback in all the land, Patrick Mahomes, is wreaking havoc out in the AFC West. Philip Rivers, a veteran whose abilities and individual achievements have rivaled Roethlisberger’s since the two first came into the league in 2004, also calls the AFC West home.

Andrew Luck used to get top billing in the AFC South, but now he resides at home. Deshaun Watson has displayed franchise quarterback tendencies, so you might say it’s his turn to claim the top bunk in that division, but that division isn’t the AFC North.

If the Steelers were in any other division in the AFC, I wouldn’t like their odds at all of competing for anything but a decent draft pick in 2020 (which would actually be in the second round, since they just traded their first round pick in the 2020 NFL Draft for Minkah Fitzpatrick).

Obviously, Dalton, despite a decent enough career that may have been better had he not been with the Bengals, has long since proven he’s no franchise quarterback.

As for the youngsters in the division? While the hype surrounding both Lamarr Jackson and Baker Mayfield has been at a franchise level, their play has yet to reach those heights….at least on a consistent enough basis.

With 1,110 passing yards, 10 touchdowns to just two interceptions, and legs that should be weaponized and have already carried him to 238 yards and another score, Jackson, a decorated college quarterback and Heisman Trophy finalist, appears to be on his way to the franchise level in only his second season.

As for Mayfield, who was the first overall pick by the Browns in the 2018 NFL Draft, he also appears to be well on his way to the elite level. Through 17 starts, he’s already passed for 4,872 yards, 31 touchdowns and 20 interceptions.

It’s those 20 interceptions that may give one pause, however. Also, Mayfield and the Browns have gotten off to a slower start than anticipated in 2019, despite the Super Bowl hype that surrounded them in the offseason.

As for Jackson and the Ravens, who both looked unstoppable over the first two weeks playing against lesser competition, they’ve fallen back down to Earth these last two games and, like Cleveland, are 2-2.

Both Mayfield and Jackson have the draft pedigree (Jackson was also a first-round pick in the 2018 draft) and raw talent to make it as top level quarterbacks in the NFL.

But they’re not there yet. And while they both certainly have the edge in experience over Mason Rudolph, who will be making just his third-career start on Sunday afternoon, when the Steelers take on Lamarr Jackson and the Ravens in a very important Week 5 match-up at Heinz Field, the gap isn’t that great.

While a player like Tom Brady, with his experience and accomplishes, might seem light years ahead of Mason Rudolph, when it comes to Mayfield and Jackson and their time in the NFL, it’s like night and later that night.

While Mason Rudolph wasn’t one of the stars of the 2018 draft class of quarterbacks, he was occasionally in the discussion when talking about the ones who could actually become something at the pro level.

The jury is still out on Mason Rudolph, a third-round pick, but as the Steelers try to recover from their rocky start to the season and actually gain equal footing with the likes of Baltimore and Cleveland, it’s important to remember that the same can be said for both Jackson and Mayfield.

Mason Rudolph doesn’t have to match the play of a future Hall of Fame quarterback in 2019. He just has to run the same race as a couple of fellow 2018 draft picks.