The Baltimore Ravens came to Pittsburgh and defeated the Steelers in overtime to the tune of 26 to 23. After last week’s victory against the Bengals, going into the game the talk was if the Steelers could win and the Browns were to lose, Pittsburgh would find itself in a 3 way tie in the AFC North.

But, as it has so many times over the last two seasons, the game turned on what’s become the Steelers Achilles Heel: Ball Security. 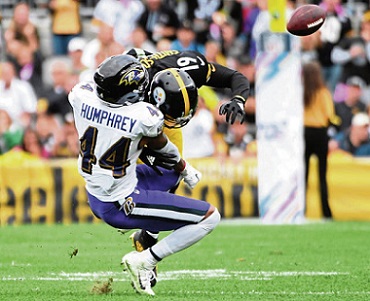 Rudolph Takes the Training Wheels Off – To Mixed Effect

Let’s take Mike Tomlin at his word that the Steelers did not plan a steady diet of Jet screens and the Wildcat. Nonetheless, the Steelers tried both in the game’s first two series, and paid mightily for it as their first Jet screen ended with a 4 yard loss, and Jaylen Samuels threw an ugly interception that was headed in Ryan Switzer’s direction.

Randy Fichtner decided to go conventional, and did something he hasn’t done much of, allow Mason Rudolph to air it out. Mason Rudolph delivered, hitting James Washington for a 21 yard gain, and then James Conner for 8 yards, before finding JuJu Smith-Schuster for a 35 yard touchdown pass.

However, Mason Rudolph misfired on several other drives as he tried to connect with Diontae Johnson and Johnny Holton on a number of deep routes that were wildly inaccurate.

But the Steelers defense was doing its part, as Kameron Kelly and Mike Hilton pulled down interceptions while Vince Williams, T.J. Watt and Cam Heyward sacked Lamar Jackson to set up a punt and his 2nd interception.

You never want to settle for field goals instead of touchdowns after turnovers, which is what the Steelers had to do, but those efforts led to a half time score of 17-13, proving that Pittsburgh was very much in the game.

Lamar Jackson’s scrambling is one reason why the Baltimore Ravens were able to put 17 points on the board so quickly. Jackson scrambled early and often and the Steelers appeared to be powerless to stop them.

I’ll leave it to the film reviewers to diagnose why, but right now I’ll credit Keith Butler‘s defense with making the adjustments necessary to neutralize Jackson’s run threat.

The gods of fate shined on the Steelers early in the second half when Devin Bush came down with an interception that really should have been overturned on replay. But what the gods of fate giveith, they taketh away.

On the Steelers third offensive play of the 2nd half, Mason Rudolph did his best Ben Roethlisberger impression by evading not one but two sacks to find James Washington for a 26 yard gain.

With Mason Rudolph down for the count, on came Devlin Hodges, a man who spent the NFL’s opening day browsing the want ads. Its been a long time since someone wearing number 6 has slung the ball for the Steelers, but let’s daresay that Devlin Hodges looked better than Bubby Brister did in his debut.

Hodges moved the team to the 1 on the strength of a 14 yard pass to Vance McDonald. One play later James Conner was barreling into the End Zone for Pittsburgh’s first lead of the day.

Delvin Hodges wasn’t perfect. His biggest play was probably his 21 yard scramble. He threw an ugly pass that was intercepted that got nullified by a penalty. But he put the Steelers in a position to win.

Fault the Steelers defense for allowing Baltimore to tie the game at the end of regulation, (although Javon Hargrave’s sack was crucial in forcing the Ravens to settle for 3.) But credit those same men for holding the Ravens to -4 yards on the first drive in over time, thanks to a Bud Dupree sack and stout play by Stephon Tuitt and Kameron Kelly.

On the Steelers second play of overtime, Devlin Hodges hit JuJu Smith-Schuster for a 10 yard gain, only to have Marlon Humphrey pop the ball lose.

As it did two weeks ago in San Francisco, as it did last year against New Orleans, Denver and Cleveland, Ball Security again doomed the Steelers.

Nor should he. Your defense can take away the ball and wreak havoc all it wants in the opponent’s backfield. Your offense can improvise and find ways to make things happen either through the air or through the ground.