Word is, some national football pundits weren’t too impressed by the Steelers 26-24 victory over the Colts at Heinz Field on Sunday.

Nope, not when it happened against a team that was quarterbacked by Brian Hoyer, who came in mid-game to replace an injured Jacoby Brissett, who became the starter just before the season when Andrew Luck decided to retire.

After all, unlike the Colts, the Steelers weren’t compromised by injuries, trades and other such departures that have transformed their roster into something it wasn’t as recently as last year.

They have been for the entire season, save for the first six quarters of 2019, when quarterback Ben Roethlisberger was still believed to be the saving grace of a franchise that no longer boasted Antonio Brown as its top receiver and Le’Veon Bell as its workhorse running back. 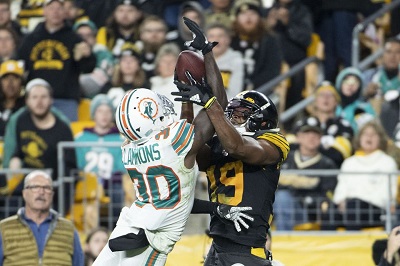 When it was officially announced the day after a 28-26 defeat at the hands of the Seahawks at Heinz Field that Ben Roethlisberger was lost for the rest of the year with an elbow injury that would require surgery to repair, the initial reaction was that Pittsburgh, who started out 0-2 to begin with, was doomed to a double-digit loss season.

All one needs to do is look at how other teams with franchise-caliber quarterbacks usually fare after they go down with injuries. This is especially the case when a young and inexperienced quarterback, such as Mason Rudolph, who Pittsburgh selected in the third round of the 2018 NFL Draft, is the next man up.

Sure, being a die-hard fan of the team, you may have quickly gotten behind Mason Rudolph and even started to believe that he could pull it off, that the boys would rally around him and go on to have a magical season.

Unfortunately, 0-2 quickly turned into 0-3 after a depressing come-from-ahead road-loss to the 49ers. Two weeks later, the Steelers sat at 1-4 following a frustrating overtime loss to the rival Ravens at Heinz Field.

Devlin Hodges came on in the Baltimore game and actually looked really good. He started the following week in Los Angeles against a Chargers team that hadn’t gotten off to its most ideal start, but was surely more equipped to bounce back than Pittsburgh.

Two weeks later, they showed some intestinal fortitude in coming back from a 14-0 deficit to defeat the Dolphins at Heinz Field on Monday Night Football. Yes, Miami came into the game with an 0-6 record, but, to reiterate, the Steelers weren’t exactly firing on all cylinders, either.

Oh, and did I mention defensive end Stephon Tuitt, who was off to the best start of his career, suffered a torn pectoral muscle in the win over the Chargers and was lost for the remainder of the season?

For the Steelers to come into this past Sunday’s game with a 3-4 record was impressive enough. But to knock off an Indianapolis team that still had enough talent to come into the day with a 5-2 record, even after Luck’s retirement, was amazing.

No, Mason Rudolph hasn’t set the world on fire. On his best day, he’s looked like a game-manager. On his worst? That’s the thing, he hasn’t looked all that bad even when he’s struggling.

The offense has certainly been no treat to watch. The receivers–including JuJu Smith-Schuster–have struggled to produce. The running backs keep getting injured. Vance McDonald hasn’t been able to repeat his 2018 performance. Heck, even the offensive line has struggled a bit this year, especially in the running game.

That’s right, I actually said that. If ever there was a year for the Steelers defense to rise up and be a force, it’s 2019, and in that regard, it hasn’t disappointed.

That’s not legendary by any stretch of the imagination. But in today’s NFL, that’s certainly good enough to win. As for takeaways, my goodness, how about 22 through eight weeks?

That’s right, this Steelers defense, one that averaged about 19 takeaways a season for close to a decade, is on pace for 44 in 2019. What about the pass-rush? As lethal as ever with 29 sacks. (Side note: I mentioned how the offensive line was struggling in the run game. Maybe, but with only eight sacks allowed through eight weeks, it’s been as good as ever at protecting the quarterback–and what a year for that.)

With 7.5 sacks, three forced fumbles, three fumble recoveries and an interception, T.J. Watt is playing like a Defensive Player of the Year candidate. As for Bud Dupree, with six sacks, he’s having the finest year of a career that’s left a lot to be desired up to this point.

And what more can be said about the addition of safety Minkah Fitzpatrick, who Pittsburgh acquired in a trade with the Dolphins on September 16?

Everyone thought the Steelers may have found their difference-maker on defense when they traded up 10 spots to select inside linebacker Devin Bush in the first round of the 2019 NFL Draft. And he may one day be that for the defense. But there’s no doubt who is it right now, and that’s Fitzpatrick, who’s 96-yard interception return for a touchdown on Sunday was a clear turning-point in a very close game.

Unfortunately, the Steelers aren’t getting a ton of help from the Ravens, who just took on two of the NFL’s best in the Seahawks and Patriots and whipped both of them in rather impressive fashion.

The Steelers sit two games behind Baltimore in the AFC North with eight weeks to play. That doesn’t seem very promising, but what about the wildcard race, where Pittsburgh is just one game behind a Colts team it just defeated on Sunday?

There’s obviously a long way to go, and the chances of this season ending in a Super fashion….well, if you bet your life savings on that, you’d be a really rich person if it actually happened. However, not every season has to end in a championship for fans to find it truly fulfilling.

Steelers fans are currently celebrating the 30th-anniversary of that magical 1989 Steelers season, in-which Pittsburgh rebounded from an 0-2 start that included losses of 51-0 and 41-10 to the Browns and Bengals, respectively, and not only made the playoffs as the AFC’s fifth seed, but was a heartbeat away from defeating the Broncos in the divisional round and making it to the AFC title game.

It remains to be seen how the rest of the Steelers’ 2019 season unfolds, but you have to hand it to them for how they’ve managed to stay in the hunt and stay relevant.