Controversial Pittsburgh sports talk show host, Mark Madden, described the Steelers defense as their most dynamic and exciting unit, these days, while describing the offense as “death.”

While I wouldn’t quite go that far with the death part, I do agree with Madden’s sentiment that, when comparing the two, the defense is more exciting and dynamic than the offense.

One might say that this is by default, thanks to the season-ending elbow injury suffered by quarterback Ben Roethlisberger in Week 2, a setback that came just months after the team had to part ways with disgruntled receiver Antonio Brown and his game-changing abilities.

I’ll give you that. After all, it was only two years ago that the Steelers were defined by the Killer Bee’s: Ben, Brown and running back Le’Veon Bell.

Therefore, I can see where one would be a bit skeptical of the defense’s true strength, especially since it’s been a question mark since 2011, when Warren Sapp described it as “Old, slow and it’s over.”

Take the draft, for example, and the fact that Pittsburgh has used its first-round selection on a defensive player every year since 2013. The last time the Steelers went offense in the first round was 2012, and that was to select guard David DeCastro. The Steelers haven’t used a first-round pick on a skill-position player since the infamous 2008 NFL Draft, when they drafted running back Rashard Mendenhall.

You actually began to see signs of it two seasons ago, when the defense led the league in sacks and set a single-season franchise record with 56.

Unfortunately, 2017 was when the team lost the services of inside linebacker Ryan Shazier with a serious spinal injury. Shazier did a lot of the heavy lifting for the defense, and when he was lost, it showed.

The defense just didn’t have the cog to make it go, to help turn it into an opportunistic unit. That’s why, despite another prolific year getting after the quarterback, the defense could muster just 15 takeaways last season.

Maybe that was why  Kevin Colbert and head coach Mike Tomlin found it necessary to act quite aggressively in the 2019 NFL Draft and traded up into the 10th spot to take Michigan inside linebacker Devin Bush.

Physically, Devin Bush is about as dynamic and explosive as Ryan Shazier was in his prime. He’s obviously not a finished product by any stretch, but he appears to be well on his way to being the player the Steelers need him to be in the middle of the defense.

Speaking of aggressive, the Steelers were that on September 16, when they sent their 2020 first-round pick to the Dolphins in-exchange for safety Minkah Fitzpatrick. And while he’s only in his second season, he does appear to be a finished product, one that has finally turned the secondary into an asset. In five games with Pittsburgh, Fitzpatrick already has three interceptions, five passes defensed, two forced fumbles and one fumble recovery. 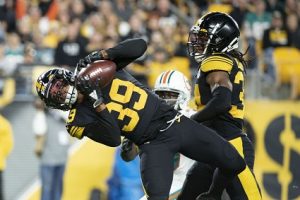 As a whole, the Steelers defense, one that is still a force in getting after the passer with 23.5 sacks through seven games, has already surpassed its takeaway totals from last year with 19. That’s good for second in the NFL.

It wasn’t that long ago that you didn’t have to look very hard to find a weakness on Pittsburgh’s defense. Now, it’s becoming harder and harder to find a scapegoat, even after a loss.

At any moment, some running back can break one the distance, or some receiver can get behind a defensive back, and, just like that, it’s seven points on the board for them.

But I don’t feel so defensive when watching Keith Butler’s unit, these days. In fact, I rather enjoy it when his players are out there putting on a show.

Who doesn’t love watching T.J. Watt and his DPOTY talent do this thing week in and week out? Who doesn’t get excited when Cam Heyward dominates an offensive lineman on his way to the quarterback?

The Steelers defense even has the signature celebrations on the team, these days, which it puts on full-display after securing one of its now patented takeaways.

In fact, I’d say it’s just a matter of time before it’s a unit Steelers fans can fully depend on to save the day on a weekly basis.