The Pittsburgh Steelers defeated the Cincinnati Bengals 16-10 at Paul Brown Stadium in a rebound win that  puts them back in the AFC Wild Card race, for the moment.

Although Pittsburgh took a 5-5 record and a 10 game winning streak against the Bengals into Cincinnati, in many ways the odds certainly weren’t stacked in the Steelers favor. On offense against Cincinnati, the Steelers would be:

In an ironic twist, the decisive change that sparked the Steelers to victory was Mike Tomlin’s decision to bench Mason Rudolph for Devlin Hodges, a player who wasn’t even on the opening day roster. 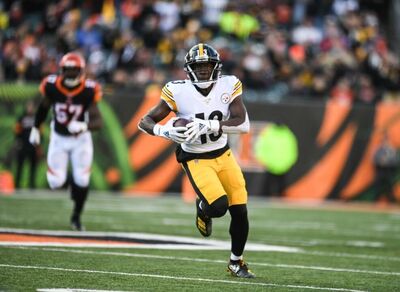 While Myles Garrett’s attempt to maim Mason Rudolph drew all of the attention during the last week, the impact felt from the Body Bag Game in Cleveland was felt elsewhere. Namely, that it deprived Pittsburgh of its number one running back and number one wide receiver.

Kevin Colbert moved swiftly and out of his comfort zone when did some practice squad poaching by signing Kerrith Whyte and Deon Cain from the Bears and Colts practice squads, respectively. Deon Cain, who’d last been seen dropping passes in the Colts loss at Heinz Field, proclaimed himself to be a playmaker upon arriving in Pittsburgh.

Once again, Kevin Colbert and Mike Tomlin showed that they don’t and shouldn’t listen to me. Deon Cain had a 35 yard catch which flipped the field and was the offense’s only play of substance on their 1st half field goal drive. Kerrith Whyte lost a yard on his first NFL carry, but then rebounded to rip off a 15 yard run on his second try.

Mason Rudolph began the afternoon respectably. While no one was forgetting that Ben Roethlisberger was on the sidelines, Rudolph held himself reasonably well, and had moved the team into scoring position when a tipped ball led to a Shawn Williams interception.

In contrast, the Bengals, under quarterback Ryan Finley showed that they could muster some roar with their rookie quarterback who hooked up on two picture perfect strikes Tyler Boyd, schooling Terrell Edmunds first and Joe Haden for a second and a touchdown.

The Bengals took a 10-3 lead into halftime, and it was fair to question whether the Steelers could summon enough offense to get back in the game.

Football fans love the rallying cry “BENCH THE QUARTERBACK” almost as much if not more than “FIRE THE COACH.” Yet, as an organization, the Pittsburgh Steelers bench quarterbacks only a little more frequently than they fire coaches.

Yet going into the game Bob Labriola entertained a question about Mike Tomlin changing quarterbacks in his “Asked and Answered” and at half time Steel City Insider’s Jim Wexell tweeted:

I would have to write this off as a tough week for Mason Rudolph and come out with Duck Hodges at QB in the second half.

Mike Tomlin gave Mason Rudolph one series which began with a sack ended in a three and out and ended with an ugly pass aimed at Diontae Johnson’s feet. The next time the Steelers got the ball back, Devlin Hodges was standing under center.

He hit on his first two strikes to Jaylen Samuels and Benny Snell, and on his third try he found James Washington wide open in the field. Washington stiff armed B.W. Webb and ran 79 yards for the touchdown.

Truth be told, those three passes seemed to be about the only tricks that Delvin Hodges had in his bag, but they were enough on this afternoon.

Defense has carried the Steelers throughout 2019 and the win in Cincinnati was no different. While that’s no surprise, there was an important X factor heading into the game, and that was Joe Mixon against a Steelers run defense that had been leaky at times.

With 10 minutes left to go in the four quarter, it looked like the Joe Mixon had finally found a chink in the Steelers armor, as he ripped off runs of 11 and 9 yards, the first of which looked to be a 5 yard loss. On the next play, Ryan Finley found Tyler Boyd for a 22 yard gain.

Devin Bush had other plans, stripping Boyd of the ball, which was scooped up by Minkah Fitzpatrick who logged his 8th takeaway for the season, which he returned 36 yards. That was the last drive that ended with positive yards for Cincinnati would earn all day.

Joe Haden and Mike Hilton teamed up to bat away passes, while Cam Heyward helped harass Finley up front setting Bud Dupree to end the day with a strip sack and recovery.

Who Starts for Steelers vs Browns?

After the game Mike Tomlin remained coy over whether Mason Rudolph would return to the starting  role against Cleveland next week or whether Duck Hodges would remain. It says here that benching Mason Rudolph against the Bengals was the right move.

Overall, he only completed 5 of 11 of his passes and, on his final pass before Chris Boswell kicked his third field goal, Hodges threw the ball away when Vance McDonald was open for a completion, which at the very least would have kept the clock running.

Outside of throwing the ball with a little more confidence, the main difference between Devlin Hodges and Mason Rudolph was in Hodges ability to avoid the rush.

Perhaps Tomlin had that tendency in mind when he teased reporters by suggesting he might already have made up his mind as to who to start. We will find out soon….