Taken from the grade book of a teacher who has just seen his classroom endure a traumatic incident here is the Steelers Report Card for the “Body Bag Game” against the Browns. 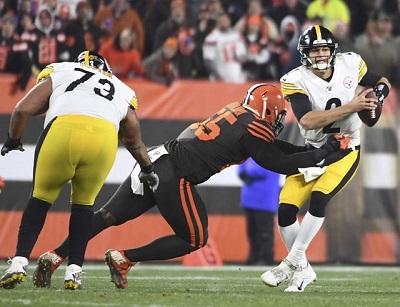 Quarterback
The short week figured to test Mason Rudolph. Many are writing off Rudolph’s entire future based on one bad night which is foolish. As Steel City Insider’s Jim Wexell pointed out, Mason Rudolph did some nice things, particularly early in the game. But his interceptions were costly, and grew uglier as the night progressed. One plus, Mason Rudolph displayed excellent tackling technique. The Steelers had a shot to win despite giving up 14 quick points, but Rudolph’s picks killed those chances. Grade: F

Running Backs
Sometimes the eye can see what it wants to, because memory has James Conner playing very well before he got hurt. However, the stat sheet of 10 yards on 5 carries and 1 catch for 7 yards tells a very different tale. Jaylen Samuels had a decent night running and catching, but his opportunities were limited. Trey Edmunds continues to show he has some serviceable skills as a reserve running back, but blocking is not one of those. Grade: C-

Tight Ends
Vance McDonald caught 3 of 7 passes targeted to him, but with wide receivers dropping like flies he really didn’t appear to be a factor in the passing game. Moreover, on at least one pass early in the first half, McDonald appeared to mail it in terms of blocking. Nick Vannett caught 1 pass on one target. The tight ends have a chance to boost this offense, but do not appear to be taking advantage. Grade: D

Wide Receivers
Wow. Where’s Cobi Hamilton when you need him? JuJu Smith-Schuster and Diontae Johnson were having decent games before blatant head shots took them both out. James Washington did well. As for Tevin Jones and Johnny Holton? Well, Holton caught his first pass, but missed on a deep one he should have had. Tevin Jones had a hand on a catchable pass that got intercepted. Grade: C-

Offensive Line
4-7-11. Those were Cleveland’s numbers for sacks, tackles for losses and quarterback hits. A quality line can’t make miracles, but can certainly provide an offense the foundation it needs to overcome deficiencies at the skill positions. On paper, and certainly when measured in terms of salary cap investment, the Steelers should be fielding an offensive line that does just that. But that wasn’t apparent against the Browns, and hasn’t been apparent for much of the season. Grade: F

Defensive Line
The Browns actually sniffed 100 yards in total rushing, but the Steelers made them work for it with the defensive line accounting for 5 tackles behind the line of scrimmage. Javon Hargrave and Cam Heyward led the team in tackles which is impressive. Grade: B 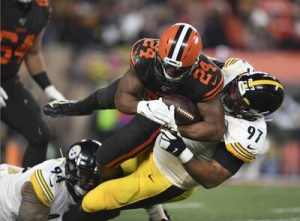 Linebackers
T.J. Watt had the team’s lone sack, hit the QB 2 other times and helped drop at least three Browns for losses. Vince Williams and Devin Bush clocked in at 3rd and 4th on tackles while Bud Dupree had 2.5 tackles behind the line of scrimmage. The Steelers defense pressured Baker Mayfield, but Mayfield eluded the rush and, at least early in the game made the Steelers pay. That’s not all on the linebackers, but some of it is. Grade: C+

Secondary
Cleveland’s first touchdown looked alarmingly easy. The Steelers defense was in complete disarray on the Browns second touchdown and the play that preceded it. After that the Steelers secondary settled down, and helped limit the Browns to go 6-16 on third down conversions. Steven Nelson and Mike Hilton led the unit in tackles and passes defensed. Grade: C 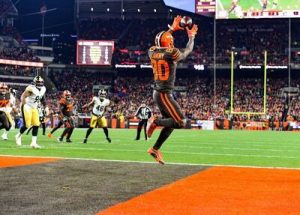 Jarvis Landry scores with nary a Steeler nearby. Photo Credit: Matt Starkey, Cleveland.com

Special Teams
Diontate Johnson and Cam Sutton returned two punt for an average of 9 yards, which is slightly above the league mean, just as was the Browns kickoff return average. Steeler punt coverage held the Browns below the league average, where as Tony Brooks-James two kick retruns average 16 yards which could be the reason why he’s looking for a job today.

Chris Boswell missed on one field goal, but that came off of a bad snap/bad hold. Boswell made his other attempt and his lone extra point attempt. Grade: C-

Coaching
Keith Butler’s defense has been the strength of the team and the unit was clearly stumbling to find its footing during the first 20 minutes of the game. Following that, however, the Cleveland Browns were scoreless until a Mason Rudolph interception at the 9 yard line with 6:32 remaining essentially gifted them another score.

And those commentaries have a lot of merit. Still, Randy Ficthner is charged guiding a backup quarterback through an offense designed for a franchise quarterback with backup and now scout team players thrust into starting roles at the skill positions.

While preparing such a young team on a short week while on the road might not be “fair,” the results indicate that the Steelers was defense up to the challenge while the offense wasn’t. Grade: C-

Unsung Hero Award
On a night when the Steelers offense was struggling to gain any semblance of traction, he kept the Browns offense from gaining any sort of field position advantage by booming off 6 punts that averaged 49.6 yards. This is helped keep the Steelers in the game until it tun overs took their toll in the 4th quarter, and for that Jordan Berry wins the Unsung Hero Award for the Body Bag Game.