The Pittsburgh Steelers defeated the Indianapolis Colts 26-24 as Adam Vinatieri shanked a field goal with 1:13 left to play.

But that doesn’t hide the fact that Pittsburgh made more than its share of mistakes and sloppy plays. In that sense, the Steelers victory over the Colts affirmed the wisdom of the late Washington DC area sports radio journalist Ken Beatrice, who often reminded listeners, “More games are lost every week in the NFL than are won.” 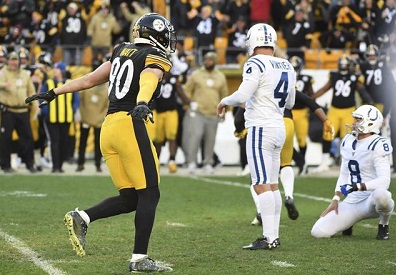 Steelers Defense Goes Big Play or Bust in 1st Half

The story on the 2019 Steelers thus far had been this:  After the week 1 debacle against New England, only a handful of plays separated a 3-4 Pittsburgh squad from victories over Seattle, San Francisco and Baltimore – 3 of the toughest teams in the league.

While the Ben Roethlisbergerless offense was finding its way, a resilient defense reaffirmed the Steelers relevance. That story while true, came with a big “But,” attached to it:

That was true. Cincinnati and Miami are competing for the 1st pick overall in the 2020 NFL Draft, while the Chargers could contend for top 10 pick. The Colts brought a 5-2 record to Heinz Field were certain to offer a stiffer test. And they delivered on their promise.

Despite losing starting quarterback Jacoby Brissett, relief pitcher Brian Hoyer moved the Colts offense with alarming ease during much of the first half, leading Indianapolis to two touchdown drives.

But the Colts defense more than held its own against the Steelers, limiting Mason Rudolph and the Steelers offense to two field goal attempts on the Steelers only two trips to the Red Zone.

The Colts answered Fitzpatrick’s touchdown with a six play 1:36 minute touchdown drive but one that ended with Cam Heyward blocking the extra point. That left 0:42 seconds in the second half, and Mike Tomlin was determined to be aggressive.

Unlike Miami last week, Frank Reich’s defense only allowed piecemeal yardage, yet on what should have been the last play of the half, Darius Leonard got greedy and hit Vance McDonald late. The extra 15 for a personal foul gave Chris Boswell the yards he needed to attempt a 51 yard field goal which he nailed.

Two miscues by the Colts in the last 42 seconds of the 1st half netted 4 points for Pittsburgh. Four points which would come in handy for the Steelers down the stretch.

Who Makes the Last Mistake?

A few critical plays often define the difference between defeat and victory in the NFL. Sometimes contests are decided by who has the ball last – think the Steelers 2009 win over Green Bay at Heinz Field.

Other times, games come down to who makes an error at a critical juncture – think how the Steelers have sabotaged themselves with poor ball security over the last year.

Both teams made mistakes aplenty in the second half.

It says here that the Steelers won because they did marginally better at taking advantage of those mistakes, but they still needed the Colts to continue making them. Bud Dupree ended the Colts first procession with a strip sack, and the Steelers converted it into a touchdown thanks to a Mason Rudolph to Vance McDonald touchdown.

Yet on their next possession, the Steelers gave up a safety, only to have Ola Adeniyi, Terrell Edmunds force a fumble which Johnny Holton recovered. But despite getting the ball at their 17, the Steelers had to settle for a field goal. 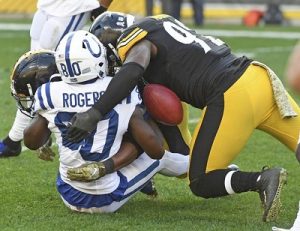 The Steelers gave Jaylen Samuels 21 touches, and while he did well, perhaps the biggest mistake Randy Fichtner made was in relying on him a little too much. Samuels was less effective in the 2nd half, particularly in the Red Zone.

And with the Steelers holding a 23 to 18 lead with just under 12 minutes left to play, he fumbled the ball, a fumble which the Colts only needed 7 plays to transform into a touchdown. But, in keeping with the tenor of the afternoon, Terrell Edmunds batted away the two point conversion, leaving the Colts with a meager 1 point lead.

Twice afterwards the Steelers had the chance to put the Colts away for good, but after a drive that started with an impressive 40 yard catch by James Washington and an opportune pass interference penalty on Diontae Johnson stalled at the 8, Pittsburgh had to settle for another Chris Boswell field goal.

Mike Tomlin explained it perfectly as he closed his press conference, “We’re far from where we want to be. But we’ll take it.”