The Pittsburgh Steelers defeated the Los Angeles Rams 17-12 at Heinz Field and improved their record to 5-4. While their margin was small, the men in Black and Gold very well may have gained something far bigger with this win.

Add an exclamation point to that, when the game includes a safety, safety, two defensive touchdowns, follow by a strip sack and an interception on the final drive.

The Steelers defense was elite against the Rams and their play was certainly worthy of the block letter throwback uniforms they wore. And yet for all of the defensive fireworks, the most important development of the game may be the maturation of Mason Rudolph. 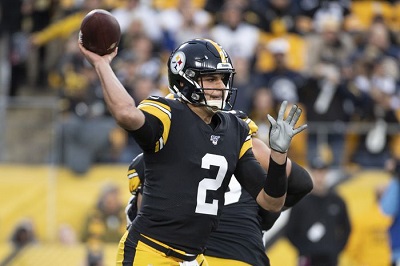 Scary Start Leads to Slugfest in the Trenches

When your center snaps that ball above your quarterback’s head on the third play from scrimmage, its not good. When an untouched defender scoops up the loose ball untouched and basically walk into the end zone, its really bad.

That’s how things started for the Steelers as Maurkice Pouncey hiked the ball over Mason Rudolph’s head and Dante Fowler got the Rams up 7-0 with less than 15 seconds elapsed. On the ensuring series, the Steelers offense managed just one yard as Jaylen Samuels ran for 3, Tony Brooks-James got stuffed for -2, and Rudolph failed to connect for with JuJu Smith-Schuster.

Rams slot receiver Cooper Kupp entered the game as the NFL’s number one receiver on third downs. Keith Butler’s boys focused on shutting him down. Mike Hilton had primary reponsiblity for that, but enjoyed help from Terrell Edmunds and/or dime safety Mark Barron.

Cam Heyward and Javon Hargrave helped end Rams drives with third down sacks. T.J. Watt set up another third and long with a sack, and helped rattle him at the end with a strip sack. Vince Williams, Jordan Dangerfield and Mike Hilton also joined the party by registering quarterback hits and, while they weren’t credited, Bub Dupree and Mark Barron met T.J. Watt at the quarterback at least once.

If ESPN’s stats are to be trusted, when the dust cleared:

Minkah the Man with Magnetic Hands

Javon Hargrave’s third down sack of Jared Goff in the first half popped ball loose and it landed just ahead the line of scrimmage. To the naked eye, it looked like an incomplete pass. Yet, the referees sounded no whistle.

Minkah Fitzpatrick scooped up the ball and returned it 43 yards for a touchdown giving the Steelers a 7 point lead with 1:56 left to play in the first half.

When the game was on the line with 30 seconds remaining, Minkah Fitzpatrick worked his magic again, as Joe Haden (who had a pick of his own) deflected a pass with Fitzpatrick intercepted again, sealing the win.

The Maturation of Mason Rudolph

The Pittsburgh Steelers defense earned all of the praise being showered on it following the win over the Rams. But Mason Rudolph’s stand up performance is flying just underneath the radar.

And no, Mason Rudolph didn’t make any fantasy owners happy with his 22 of 38 for 242 and one touchdown passing day.

But make no mistake about it, Mason Rudolph made important strides against the Rams. He executed the drive that ended with a 3 yard pass to James Washington to perfection. After giving up his 2nd safety in as many weeks at the hands of the almighty Aaron Donald, he stood clam in the pocket and executed a 4th and 1 conversion by connecting with Trey Edmunds.

Against the Rams, Mason Rudolph embraced his role as leader of the Steelers offense in a way he hadn’t done before. Repeatedly during the game, Rudolph stood at the line of scrimmage, surveyed the defense, and unhesitatingly changed protections or audibled to a new play.

The Los Angeles Rams might have gotten to Mason Rudolph just a little less frequently than the Steelers got to Jared Goff. But the Rams never got into Mason Rudolph’s head, and that was the difference in this victory for the Pittsburgh Steelers.