It has been over a week since the now infamous Steelers-Browns Body Bag Game yet the contest’s final 8 seconds continues to dominate the news.

Steelers fans got a bit of good news when the NFL’s appeals committee reduced center Maurkice Pouncey’s suspension from 3 games, and unprecedented total for participating in an on-the-field fight, to 2 games. Larry Ogunjobi’s 1 game suspension was upheld and as was Myles Garrett’s indefinite suspension. 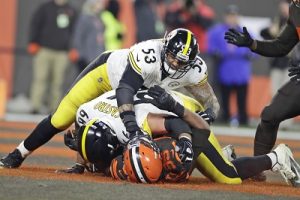 In a written statement, Myles Garrett confirmed the leak:

I was assured that the hearing was space that afforded the opportunity to speak openly and honestly about the incident that led to my suspension. This was not meant for public dissemination, nor was it a convenient attempt to justify my actions or restore my image in the eyes of those I disappointed. I know what I heard….

Gotta love the “This was not meant for public dissemination….” Really? This is from Myles Garrett, the man who everyone extoled for his poetry writing and plans to become a paleontologist expects us to believe this?

If this “…was not meant for public dissemination” then why did he have he or his agent leak the news? (Does anyone really think that Derrick Brooks or James Thrash, the men who upheld the suspension leaked the news?)

Speaking both through his agent and through Steelers spokesman Burt Laurten, Mason Rudolph vehemently denied the charges.

On the latter point, Steelers fans should trust and hope that the NFL did in fact do a real investigation, and that no audio evidence surfaces later. Not Roger Goodell has track record for fishy investigations or anything like that.

However, Steelers who were on the field at the time continue to defend Mason Rudolph. Matt Feiler who was a few feet away during the whole incident told Joe Rutter of the Pittsburgh Tribune-Review, “He didn’t say anything.”

Mason Rudolph did not address reporters, but Cam Heyward described him as “Distraught” by the accusations. Heyward went on to assert, “The kid made a bad mistake, but he never crossed the line when you’re talking about racial slurs.”

While news that Maurkice Pouncey’s suspension has been reduced was certainly welcome, he will not be available for the game against the Bengals. Nor will other victims from last Thursday’s “Body Bag Game.”

JuJu Smith-Schuster remains in the NFL’s concussion protocol and is nursing knee and foot injuries. James Conner has not practiced and is extremely unlikely to play. Artie Burns, another injured player from last week’s game, was a limited participant.

All news was not a bad, however. Diontae Johnson was a full participant in practice, and Benny Snell has practice all week and will likely be available to back up Jaylen Samuels.