After Myles Garrett attempted to maim Mason Rudolph at the end of the “Body Bag Game” a host of Cleveland commentators rushed to contrast Garrett’s assault with a deadly weapon and his character. 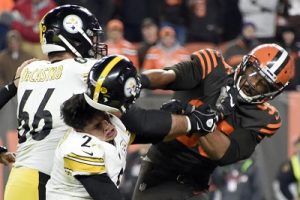 Listening to Cleveland-area reporters telling me how nice of a guy Garrett is, and how well he treats his dog, made me think of reporters interviewing neighbors of mass murderers.

We’ve read about how Myles Garrett writes poetry and aspires to be a paleontologist when he retires from the game. There’s been no word on whether or not he is bilingual. But even if he isn’t fluent in Spanish, he’s master the art of:

The statement he leaked after learning this his appeal of his indefinite suspension illustrates this perfectly:

To those of you who are not bilingual the phrase “Tirar y después esconder la mano” literally means “To throw, and then hide your hand.” The meaning isn’t literal however, it refers to someone who says something, and then tries to pretend they really didn’t mean it the way you understood it, when in fact the meant exactly what they were saying.

He’s not denying he made the accusation. But he’s trying to distance himself from the implications of his very words. His second sentence reveals all:

This was not meant for public dissemination, nor was it a convenient attempt to justify my actions or restore my image in the eyes of those I disappointed.

Isn’t that grand! Let’s take this apart piece by piece.

“This was not meant for public dissemination.”

Is there ANYONE naïve enough to actually believe this? Would even the most hardened Myles Garrett apologist accept this at face value? Let’s begin with the fact that the number of people who heard Myles Garrett say this is finite. The number of people with access to the notes of minutes of the appeal hearing is larger, but the circle remains small.

Steel Curtain Rising has ZERO access to sources on this, but whoever leaked this is either obviously sympathetic to Myles Garrett or really wants to hurt Mason Rudolph.

Everything leaks out of the league office. He need look no farther than all of the leaks about failed drug tests. If Myles Garrett is as smart as everyone says he is, he knew full well that someone would leak this.

(And this presumes that it Myles Garrett’s agent isn’t the source of the leak.)

“…nor was it a convenient attempt to justify my actions…”

Really? It wasn’t? Then why say it?

Seriously. If Myles Garrett really accepts that attempting an action on the football field that would carry criminal assault charges if it occurred in the parking lot is not acceptable under any circumstances, then why make an accusation which many people were ALREADY arguing was mitigating, if not justifying circumstance.

“…or restore my image in the eyes of those I disappointed.”

Hum. Funny how Myles Garrett would insist on denying that this was one of the reasons why he charged Mason Rudolph of provoking him with a racial slur. I mean, he never thought the accusation was ever going to become public, so why would he worry about how “those I disappointed” would react to it?

The last 8 seconds of the Body Bag Game have generated a lot of sound and fury. But the fundamental facts remain the same:

And now we can add one more fact, Myles Garrett has openly accused Mason Rudolph of provoking him by uttering a racial slur in a public effort to justify his actions and have his suspension reduced while branding Rudolph as a racist.

We started by invoking the Latin American slang phrase “Tirar y después esconder la mano.” We’ll close by paraphrasing the words of William Shakespeare as spoken by Queen Gertrude in Hamlet “The defensive end doth protest too much, methinks.”