Taken from the grade book of a teacher who is pleased as punch to see half of his class excelling to their potential while worried that the other half keeps losing points due to misspellings and other sloppy mistakes, here is the Steelers Report Card for the win over the Rams at Heinz Field. 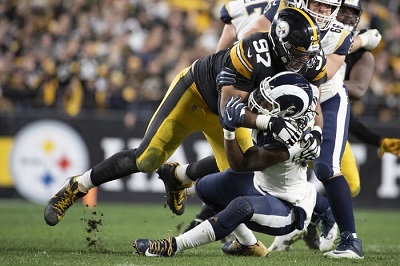 Quarterbacks
Mason Rudolph passed for a career high 242 yards as he completed 22 of 38 attempts with no interceptions and one touchdown. Hardly numbers to impress a Fantasy Football owner. But what those numbers fail to demonstrate is the poise, control and command that Mason Rudolph displayed on the field. Ultimately, that proved to be a difference maker. Grade: B

Running Backs
Jaylen Samuels got his 2nd consecutive start and was limited to 40 total yards from scrimmage as he was neither a threat to run nor as a pass catcher. Tony Brooks-James got 11 yards on 6 carries. Trey Edmunds got 1 yard on 4 carries, although he did convert a critical 4th down pass. It wasn’t all their fault, but the Steelers needed more from their running backs. They didn’t get it. Grade: D

Tight Ends
The Steelers used a lot of two tight end sets in hopes of helping the offensive line against the Rams stout front seven. The lack of running lanes for the running backs and the punishment Mason Rudolph faced speak for themselves. Vance McDonald caught 3 of 7 passes thrown his way for 11 yards. Nick Vannett caught 1 of 1 passes thrown his way. Grade: C-

Wide Receivers
James Washington took another stride forward in catching 6 passes for 90 yards, including a touchdown. Yet he coughed up the ball just as he was moving the Steelers into scoring position. Diontae Johnson caught 4 passes for 64 yards while JuJu Smith-Schuster, battling Jaylen Ramsey for most of the day, was limited to 3 catches for 44 yards. The Steelers wide outs must do better. Grade: C-

Offensive Line
The Steelers offensive line had its stiffest test, so stiff that Mike Tomlin reconfigured it by moving Matt Feiler to guard and Chukwuma Okorafor to right tackle. Things didn’t start well as a bad snap spotted the Rams 7 points. Mason Rudolph had good time to throw at times, but he did take more punishment than he has all season. As for the running game? The Rams recorded 12.5 tackles behind the line of scrimmage. Grade: D-

Defensive Line
Javon Hargrave led the Steelers defensive line in tackles, including a key strip sack, which although  probably a gift from the officials, turned the game for the Steelers. Cam Heyward registered one helacious sack, another tackle for a loss, 2 passes defensed and 3 quarterback hits. Tyson Alualu had a hand in a tackle behind scrimmage and 4 tackles. Grade: A-

Linebackers
We could have written this ahead of time:  T.J. Watt led the unit with 2 sacks including a strip sack. Bud Dupree had 4 tackles, Vince Williams and Devin Bush had 3 a piece while Mark Barron clocked in the most with 11 and 1 pass defensed. Strong play by the line backers, but cursory viewing replays suggest that the inside linebackers were largely responsible for the gaps that Todd Gurley and Malcom Brown exploited. Grade: B+

Secondary
Is Minkah Fitzpatrick for real? Or is Minkah Magic just a dream? Each week when the Steelers need a big play Minkah Fitzpatrick steps up on cue. The Rams game added to his lore, as his heads up fumble recovery for a touchdown and last minute interceptions were game changers. Mike Hilton played point man in shutting down Cooper Kupp, while Steven Nelson had a key tackle to force a third down with 11:44 left to play. Terrell Edmunds helped bat away a pass in the end zone, although he’s lucky he didn’t get called for pass interference. Grade: A 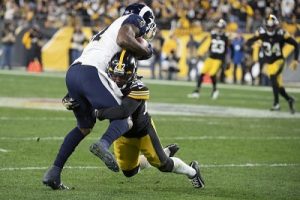 Special Teams
As usual the Steelers coverage units gave up a longish punt and kick returns. Ryan Switzer got negative yards on the one punt return he tried to bring back. Diontae Johnson returned 3 punts including one for 14 yards, but he had a fumble.

The key play for Danny Smith’s special teams was Trey Edmunds interception to stop a fake punt attempt, which could have been a game changer. Grade: B

Coaching
Randy Fichtner’s taking a lot of heat. Some of it is justified, some not. Fichtner didn’t fumble those three balls nor did he drop those six passes. These types of execution errors are hobbling the offense. He’s also playing with a running game on life support.

However, winning and losing starts at the line of scrimmage, and the put plainly, Pittsburgh is consistently losing that battle when it comes to establishing the run.

The addition of players like Steven Nelson, Minkah Fitzpatrick, paired with the maturation of T.J. Watt and Bud Dupree seems to be making Keith Butler much, much a better coach too. Seriously. The Steelers defense is performing at levels not seen since at least 2010 if not 2008 and has scored as many touchdowns as the offense in the last two weeks.

The Steelers started the season at 1-4 and, while injuries contributed to that “September stench,” they’ve remained and issue since then. Today they’re 5-4 and “Playoffs” are a real possibility for Pittsburgh. Credit Mike Tomlin for keeping his team focused and finding ways to win. Grade: B

Unsung Hero Award
For the last two years he’s been the top dog in his unit. Steelers management agrees, so says the contract he signed before the season. Since then his spot in the pecking order has been displaced, but he’s but he’s not been deterred, as his five defensed passes led the team on Sunday, including a final one that set up the game sealing interception, and for that Joe Haden wins the Unsung Hero Award for the win over the Rams.