Taken from the grade book of a teacher who hopes his students realize that guessing the right answers on multiple choice questions will only get them so far, here is the Steelers Report Card for the win over the Colts. 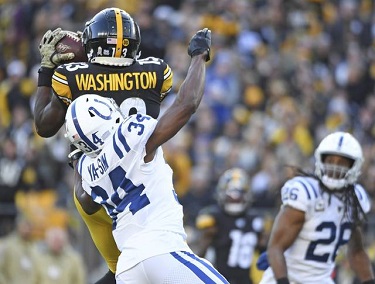 Quarterback
Mason Rudolph was 26 of 35 for one touchdown and one interception at an economical 192 yards. At times Rudolph was spot on. At times he moved the offense was improve efficiency. Yet the Steelers offense stalled in the 4 of 5 trips to Red Zone. He also coughed up the ball. Grade: B-

Running Backs
Trey Edmunds saw his first action and did reasonably well, although most of his yardage came on one carry. Jaylen Samuels was not effective running the ball, but he did a lot of damage catching passes. His fumble however, proved to be costly. Tony Brooks-James got one yard on his first NFL carry. Roosevelt Nix saw some action blocking. Grade: C

Tight Ends
Vance McDonald scored the offense’s lone touchdown and he caught 5 other passes. Nick Vannett had one target but the ball was not catchable. The run blocking wasn’t there for much of the game, and the tight ends bear some responsibly. Grade: C

Wide Receivers
Another VERY quiet day for the wide receivers, who were only targeted on 11 of 31 passes. JuJu Smith-Schuster only had 3 catches for 16 yards and let a ball bounce off his hands that got intercepted. Diontae Johnson caught one of 3 passes thrown to him, and had 1 run on a reverse for 2 yards. Johnny Holton had one pass thrown his way, which surprise, he didn’t catch. Grade: C-

Offensive Line
Mason Rudolph only suffered one sack and the ESPN stats indicate he was only hit 3 times, but Rudolph seemed to face more pressure than usual. The offensive line did some nice run blocking during portions of the game, at other times runners were getting hit at or before the line of scrimmage. The offensive line must be more consistent. Grade: C-

Defensive Line
Cam Heyward led the unit with a half sack and 6 tackles and a quarterback hit. Javon Hargrave was right behind with 4 tackles, while Tyson Alualu clocked in at one. The Colts had some success rushing the ball, and while the Steelers got to Colts quarterbacks pressure was inconsistent. Grade: B- 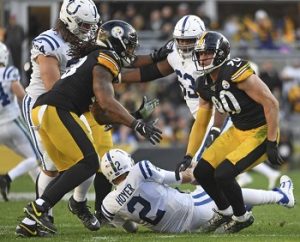 Linebackers
Bud Dupree continues at this wrecking crew pace, with two sacks and yet another strip sack which helped set up a Steelers touchdown. His tackle for a loss was critical. T.J. Watt had a sack and a half, and Mark Barron had a half sack. Devin Bush defended a pass and registered a tackle for a loss while Vince Williams and four tackles one of which was a loss. The linebacking was solid and spectacular at times, but greater consistency was needed. Grade: B

Secondary
The Steelers secondary has not seen the caliber of play it is now seeing from Minkah Fitzpatrick since Troy Polamlau was in his prime. Minkah Fitzpatrick’s pick six was a game changer in a minimum four point swing for the Steelers. Terrell Edmunds led the team in tackles and swatted away the two point conversion. Mike Hilton added a sack and Steven Nelson was second on the team in tackles. Joe Haden only had 3 tackles but his coverage was tight.

But like the rest of the defense, with these highs came the lows of several Colts scoring drives that seemed to come all too easy. Grade: B 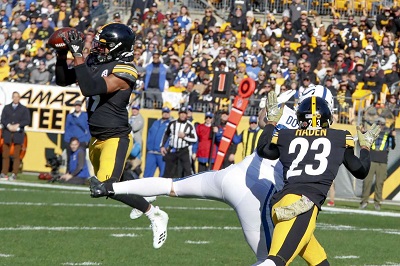 Special Teams
The Steelers continue to give up overly longish kick returns, and on the flip side, Ryan Switzer’s return efforts can be charitably described as “average.” But that can’t take the lust off of what the rest of the special team accomplished:

Oh, and Chris Boswell was 4-4 on his other attempts and perfect on extra points. The Steelers needed their special teams to be special against the Colts. And Danny Smith’s units delivered. Grade: A

Coaching
While there’s no reason for alarm at this point, Keith Butler needs to take a look at the tapes and see if he can diagnose whatever weaknesses the Colts exploited on 3 touchdown drives that looked all too easy.

Randy Fichtner’s issues are a little more serious. The Steelers have been solid in the Red Zone up to this point in the season, but against the Colts they were 1-5 in terms of touchdowns. Reach the end zone on just one more of those and there’s no need to break out the Adam Vinatieri voodoo dolls as time expires.

Finally, for the second straight week Mike Tomlin remained aggressive at the end of the first half, and again he got points on the board, points that made a real difference when the final gun sounded. Grade: B-

Unsung Hero Award
The Steelers drafted him instead of picking a player at any number of defensive positions. He dazzled in preseason, only to author a rookie year which was known more for the plays which he didn’t make, rather than the ones he made. He dazzled again in preseason, but has largely been absent during the regular season.

Against the Colts, he was four for four on targets including a 40 yarder that helped set up the Steelers go ahead score. Certainly this was no “breakout game,” but it was a solid performance when the Steelers needed one and for that James Washington win the Unsung Hero Award for the win over the Colts.