My, how different things look and feel just a week later. The Buffalo Bills arrival in Pittsburgh Sunday night and their departure after defeating the Steelers 17-10 served as a collective slap in the face for Steelers Nation.

Since then bloggers and credentialed scribes have offered all sorts explanations over what this loss all means. However, there’s no need to complicated conclusions here. The lesson from the loss to the Bills is simple: the 2019 Steelers are not immune from the forces of gravity. 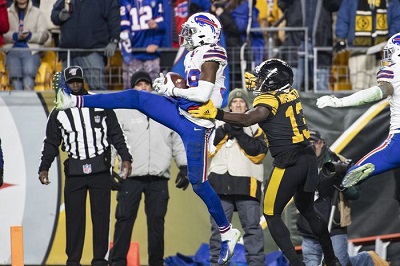 Gravity in the NFL

Discovered by Issac Newton while sitting under the apple tree at Oxford in 1687, Webster’s defines gravity as: the gravitational attraction of the mass of the earth, the moon, or a planet for bodies at or near its surface.

In science, gravity is an external force. In the NFL the pull of gravity can come from external factors. But the good news AND bad news for the Steelers is that in the NFL teams can create their own gravity wells.

A Brief History of the Steelers vs Gravity

The pull of the NFL’s gravity can be felt during a single game, over the course of a season or during an era. And the Pittsburgh Steelers have defied graveity at any number of times in in their history.

During the early and mid-1990’s, the Steelers saw an annual exodus of free agents, many of them Pro Bowl caliber, out of Pittsburgh. Yet Bill Cowher and Tom Donahoe kept fielding contenders, until gravity finally won.
From a time, Ben Roethlisberger was the NFL’s most sacked quarterback behind a porous offensive line. Mike Tomlin and Kevin Colbert defied NFL gravity for a time, employing both an offensive coordinator who was happy to “let Ben be Ben” and a “Plug and Patch” approach to offensive line building.

Here in 2019, the Steelers have not only lost their starting quarterback and All World wide receiver but they’ve also had to bench Mason Rudolph and lost JuJu Smith-Schuster, in addition to losing James Conner and having to start any number of practice squad players at the skill positions.

The question is, does the loss to the Bill suggest the Steelers are succumbing to external forces of gravity, or are they creating their own gravity?

Point by Point: Breaking Down Steelers Loss to the Bills

With the benefit of a few days of analysis, it is easy to see that the Steelers loss to the Bills came down to a handful of critical plays, and one disturbing tendency. Let’s look at each of those elements.

Jordan Berry first punt went for 22 yards and gave the Bills the ball at the Steelers 40 yard line. Sure, the Steelers responded with a Vince Williams-led gang sack of Josh Allen, but Allen also slipped past pressure on third down, and connected with Josh Brown to convert a 4th and 6.

It took them four more plays, but the Bills turned that 22 yard punt into the first touchdown of the night.

Jordan Berry has had a solid year and he doesn’t deserve to be a scaptgoat, but he picked the wrong night to shank a punt, because it set the Bills up for a relatively easy 7.

Steven Nelson has toiled in relative anonymity this season while Minkah Fitzpatrick, T.J. Watt, Cam Heyward, Bud Dupree and Joe Haden have grabbled the defensive headlines for the Steelers. So it seem to be a piece of poetic justice when picked off Josh Allen and returned the ball 33 yards to to the Bills 20 with 2:33 left to play.

Instead, James Conner stood in the Wildcat, got a low snap which he couldn’t cleanly give to Diontae Johnson, who put the ball on the ground and killed any chance the Steelers had of score before the half. 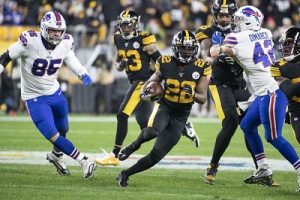 Later, in the third quarter, with the Steelers just having taken the lead, T.J. Watt popped the ball from Devin Singletary’s hands and Mike Hilton pounced on it. While Pittsburgh recovered it its own 31, a long touchdown drive would have given the Steelers a 10 point lead. Jaylen Samuels started things off with a 5 yard reception, then Devlin Hodges gave up sacks on back-to-back plays.

This was by far Devlin Hodges worst game. And truth be told, each interception was uglier than the previous pick. But the Steelers defense forced a punt after the first pick, held the Bills to zero yards and forced a field goal on after the 2nd. The next two came in the end zone in the final two minutes.

4. Failure to Control the Line of Scrimmage

The Bills sacked Devlin Hodges 4 times, hit him 7 times and kept him under duress all night long. While Steelers running backs ripped off some nice runs, the Bills also recorded 9 tackles behind the line of scrimmage.

Is Internal or External Gravity Pulling Pittsburgh Down?

The 2019 Steelers formula for defying gravity has been to mix, mistake free, ball control offense with dominating, turnover producing defense. There’s nothing novel about that. But patching together 8 victories with a practice squad offense is unique.

The Steelers defense remains sound. The Bills only went the length of the field once. The until also limited points scored off of 5 turn overs to 10. That’s still winning football. Moreover, the Steelers defense continues to produce turnovers.

On offense, it is easy to look at Devlin Hodge’s ugly interceptions and/or failure to see an open James Washington over the middle and say, “The undrafted rookie’s been running on air Wile E. Coyote-like and he finally looked down….”

Duck Hodges did fall to earth Sunday Night, but it doesn’t necessarily mean the game is too big for him. The key take away from the Bills game is that Steelers can’t count on Devlin Hodges to win games for them.

The most troubling tendency coming out of the Bills game is the poor play of the offensive line. The offensive line has disappointed all season, but in the year’s biggest, most important match up it failed to pull its weight.

We haven’t seen much of that in 2019. For both better and for worse the Steelers offensive line only has two more chances to change that.