The Pittsburgh Steelers traveled to the desert and defeated the Arizona Cardinals 23-17 in another wild, white-knuckle game that went down to the wire.

But more importantly, the victory affirmed a fundamental truth about this team’s identity: When the game is on the line, count on these Steelers to find new ways and, if necessary, new faces to win. 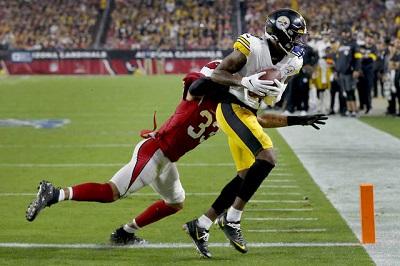 Much has been made about the 2019 Steelers ability to defy the pull of gravity imposed by injuries, starting quarterback ineffectiveness, trades and free agent defections. But at the end of the day, the formula for the Steelers success has remained simple:

Yet, the Steelers showed no inclination to stick to the script. In the first quarter Pittsburgh marched to a 10 point lead on the strength of a Chris Boswell field goal followed by an electrifying 85 yard punt return by Diontae Johnson. For the first time all season, the Steelers were starting fast.

The Steelers continued to deviate from the script on their next possession, when Benny Snell coughed up the ball at Pittsburgh’s 30. The Cardinals marched down to the Steelers 3. It didn’t seem to matter:

In past situations, it’s fallen on Fitzpatrick to secure the turnovers and players like T.J. Watt and/or Bud Dupree to disrupt the backfield, but in their first goal-line situation, Fitzpatrick and Williams did the damage behind the line of scrimmage while Nelson provided the splash in the secondary.

But Devlin Hodges responded with an expertly managed two minute drill that got the Steelers back on the board with another field goal before the half. Hodges wasn’t flawless on the drive. He gave up a strip sack which would have been disastrous; however Matt Feiler covered it up, and Kerrith Whyte got back all 10 yards with a brilliant run up the middle on the next snap.

Faces in New Places Continues in Second Half

The theme of faces in new places continued in the 2nd half. After the Steelers pulled ahead by 10 late in the third quarter, the Cardinals mounted a long drive of their own. Faced with a 4th and 2, Arizona decided to go for it all. Kyle Murray had a lane to get the first down, but aired the ball out, only to have T.J. Watt intercept.

That gave the Cardinals the ball at Pittsburgh’s 32, and they only needed 3 plays to move within three points. Yet, Diontae Johnson, who’d already had a critical catch and a touchdown earlier in the half, delivered again.

A clock management lapse by Hodges ended up giving the Cardinals the ball with 1:42 left to play, but successive sacks by Cam Heyward and Bud Dupree set up a Joe Haden interception on 4th and 17 with 47 seconds left to play.

Steelers Prepare for Showdown with Buffalo

The Steelers now face a show down next week at Heinz Field against the Buffalo Bills.

Who would have thought that a year that included a season-ending injury to Ben Roethlisberger, a benching by Mason Rudolph, prolonged injuries to JuJu Smith-Schuster and James Conners would come down to a Week 15 Sunday Night football show down, and one against the Buffalo Bills of all teams?

Yet when asked for the secret to his success, Mike Tomlin explained:

Bills head coach Sean McDermott would no doubt say the same. Yet as McDermott focuses on the stopping the Steelers, he’d better do so with a wide-angle lens, because the win over the Cardinals proves that anyone of the 53 men on the Steelers roster can and will make a play when called upon.