It has been said that the fans of the Pittsburgh Steelers are entitled. Fair enough, and the reason that it’s fair is because it’s true.

After all, regardless of what happens on Sunday, the Steelers will kick off the final game of their 2019 regular season with more than a reasonable shot at qualifying for the playoffs.

Although 2012 remains the lone season when a Mike Tomlin team was eliminated from the playoffs before the season’s final gun, playing for the postseason in week 17 didn’t seem possible after Week 2 when it was announced that quarterback Ben Roethlisberger had suffered a severe elbow injury that would require surgery and end his 16th season well before it even had a chance to pick up the steam necessary for the team to meet its usual high standards. 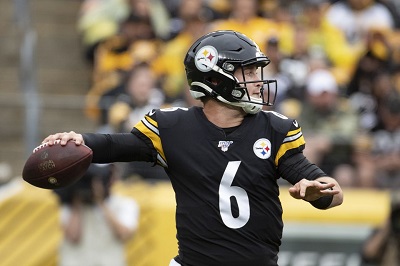 But if you’re reading this page, you obviously know the team, despite totally inexperienced and (it would be appear) talent-deficient quarterbacks Mason Rudolph and Devlin Hodges playing musical chairs all season while trying to lead an offense that has left a lot to be desired in the skill-position and offensive line department, has managed to win eight games (so far) and has a direct line to the playoffs with a win this Sunday coupled with a Titans’ loss.

Again, if you’re reading this page and are an entitled Steelers fan, you should know this kind of thing rarely happens in the NFL. When a quarterback the caliber of a Roethlisberger goes down, the team usually sinks faster than someone who owes the mob a lot of money.

The Steelers were a franchise that couldn’t have been more of a laughing-stock from its founding in 1933 all the way up until 1971, when it still had yet to win its first postseason game.

Then, 1972 happened, the Steelers won 11 games and a division title. And just when it looked like their fairy-tale season would end on December 23, 1972, in a hotly-contested divisional round playoff game against the Raiders at old Three Rivers Stadium, the Immaculate Reception happened. Do I even have to explain that play to you? If so, Google it. It involved Franco Harris, Frenchy Fuqua, Jack Tatum and a ricocheted football that either hit Fuqua or it didn’t (and there has always been a question of whether or not it hit the turf of TRS before Franco gathered it in and galloped into Steelers lore). 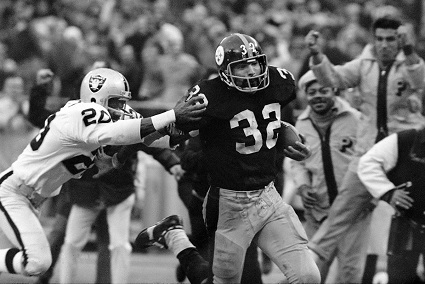 That play, one that has been impossible to duplicate in the 47 years since it happened — which further illustrates just how improbable it actually was — launched the Steelers dynasty.

A few years later, following the first two world championships in team history, the Steelers began the 1976 season looking to three-peat as Super Bowl champions. Unfortunately, along with a rocky 1-4 start to the season came a severe neck injury suffered by quarterback Terry Bradshaw after being slammed on his head by Browns defensive lineman Joe “Turkey” Jones in a Week 5 loss in Cleveland.

Terry Bradshaw would go on to miss a total of six games that season and was replaced by Mike Kruczek at quarterback. In those six games, Mike Kruczek didn’t throw a single touchdown and averaged 126 passing yards per game. But thanks to an all-time great defense, MIke Kruczek won all six of his starts. The Steelers recovered from their 1-4 start and won their next 10 games before falling to the Raiders in the AFC title game.

Fast-forward many decades to the 2005 season and a Steelers team that just barely qualified for the NFL playoffs as the AFC’s sixth seed. Historically, wildcard teams had rarely fared well in the postseason–especially the ones tasked with winning all of their games on the road just to reach the Super Bowl. 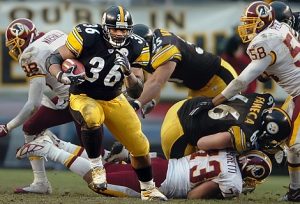 Not only did the Steelers become just the second team in league history to win three road games on the way to the Super Bowl, they did the 1985 Patriots one better by knocking off the Seahawks in Super Bowl XL. Where was that Super Bowl held? In Detroit, Michigan, hometown of legendary running back Jerome Bettis, who got to announce his retirement right after the game in a stadium–Ford Field–that was built not far from where he was born.

The Steelers have had exactly three head coaches in the last 50 years. That’s because after Chuck Noll retired following the 1991 season, the Steelers replaced the four-time Super Bowl-winner with Bill Cowher, a Pittsburgh native who would go on to achieve great success in his own right–including bringing home the franchise’s first Lombardi in 26 years.

Bill Cowher resigned following the 2006 season, and the Steelers replaced the 2020 Pro Football Hall of Fame finalist with Mike Tomlin, a man who, in addition to winning a Super Bowl of his own, has never had a losing record in 13 seasons as Steelers head coach.

If Pittsburgh advances to the postseason and even wins a game, would you really be surprised? Only if you’re not an entitled Steelers fan.

2 thoughts on “Will the Steelers 2019 Season Quiet Their Entitled Fan Base?”