The Pittsburgh Steelers traveled to New York needing a win (and some help) to clinch a playoff berth. While they got the help they needed, the New York Jets nonetheless grounded the Steelers the tune of 16-10.

The loss to the Jets followed the same narrative as it has all season for the Steelers. Although New York provided a new stage, as It has all season long, Injury remained Pittsburgh’s chief antagonist. Similarly, the difference between victory and defeat came down to the Steelers ability to compensate against the ravages of Injury. 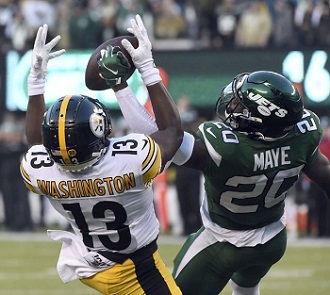 The New York Jets started fast, leaning on  on Le’Veon Bell and a pass interference call against Minkah Fitzpatrick to secure scoring position. From there Sam Darnold threw a picture-perfect pass to Robby Anderson sandwiched between Joe Haden and Terrell Edmunds to put the Jets up by 7 with barely 5 minutes elapsed.

The Steelers offense mixed some short passes and some quality runs to James Conner to get the Steelers going, but 8 plays into Pittsburgh’s first possession Devlin Hodges did something he’s seldom done this year – try a pass over the middle to Vance McDonald – and the Jets intercepted.

The Steelers reached the Red Zone on the strength of  more James Conner running, a long pass to Diontae Johnson and a horse collar tackle on James Washington. However, once there Devlin Hodges tried to get the ball over the top of triple coverage on Jaylen Samuels and Marcus Maye intercepted him for his troubles.

With 5 minutes remaining in the 2nd half, the Steelers were down 10-0, a deficit which felt insurmountable.

Perhaps “surprise” is a bit too dramatic. Mike Tomlin never formally named Devlin Hodges as his starter, and his chief criteria justifying the choices he made has been “he didn’t kill us.” Publicly, the Steelers have proceeded as if Devlin Hodges would close the year for the Steelers, even if reliable reporters sent mixed signals about the prospect of a QB change.

It would be poetic to say that Rudolph sparked an immediate rally, but the Steelers first drive with Rudolph ended in a punt after six plays. But Steelers defense got the ball back and Mason Rudolph methodically moved the Steelers from their 14 into field goal range.

Chris Boswell got the Steelers on the board, and the Steelers defense got the ball back. Mason Rudolph hit Diontae Johnson for a 29 yard touchdown pass with 9 seconds remaining in the half.

The Steelers had tied the game by scoring 10 points in the half’s last 2:24. Going into the locker room, its seemed like Mason Rudolph and his Red Nose just might guide the Steelers home tonight….

After the Jacksonville playoff debacle, Art Rooney II he argued that it is “difficult” to play defense in today’s NFL. He is right. The league has regulated the game in almost every way possible to increase both passing and scoring to keep the networks and fantasy owners happy.

At other times, it has merely been great. The game against the Jets was one of those occasions. After Chris Boswell’s field goal, the Jets remained aggressive, and tried to score with 1:18 they had left.

As recounted above, the Steelers offense took advantage, and tied the game with a touchdown. In the second half, the Steelers defense limited the Jets to two field goals and forced 3 punts. Bud Dupree’s sack on 3rd and 9 helped force the Jets first field goal, but that was the half’s only splash play by the defense.

Splash plays or not, the Steelers defense held the Jets to two field goals in a second half that began with a 10-10 tie. In normal situations, that’s all you can ask for. But 2019 has been anything but normal for the Pittsburgh Steelers.

Mason Rudolph looked sharp in running 2 two minute drills to end the first half for the Steelers, the second of which ended in a touchdown.

This unfortunately exhausted the “1 touchdown a game” quota that Pittsburgh’s 2019 offense is permitted to produce. The Steelers played the entire second half without James Conner, who with just six carries clearly proved he’s the superior back to Kerrith Whyte and Benny Snell Jr.

On the next drive Devlin Hodges did complete a pass for 15 yards. But soon after that he was sacked and then a failed exchange with B.J. Finney aborted a 3rd down conversion attempt. The Steelers next drive netted negative four yards. Their final effort saw James Washington get two hands on a ball in the end zone only to have it pushed away.

The Steelers had another shot, but another botched exchange saw Hodges fumble and fail to connect with JuJu Smith-Schuster. Alas, a second touchdown simply wasn’t in the cards for the Steelers offense at MetLife Stadium.

After the game, reporters asked Mike Tomlin if losing a running back, a center and a quarterback to injury was too much to overcome. Tomlin balked at the suggestion, reaffirmed that “The Standard is the Standard,” and offered the easy example of the Steelers defense opening the game by giving up by giving up an easy touchdown.

An offense that continually loses its top skill players while playing behind an underperforming offensive line can only take an NFL team so far. And that offense has taken the Steelers form controlling their own destiny just one week ago to needing a road victory over the Ravens and help to make the playoffs.