Members of the Pittsburgh Steelers closed the year by voting T.J. Watt as the MVP for the 2019 season, a move that was widely expected and an honor that is richly deserved.

Prior to the 2017 NFL Draft, Steel City Insider writer Matt C. Steel described T.J. Watt as a “unicorn” in terms of his ability to be the type of outside linebacker who could both pressure the passer and work in coverage.

At the time, the Steelers were coming off of the 2016 season, which had been saved, in part by Mike Tomlin’s decision to bench Jarvis Jones and start James Harrison in his place.

James Harrison made an immediate impact in terms of pressuring the passer and setting the edge, but his limited ability to cover receivers down the field became brutally apparent in the Steelers loss to the Patriots in the 2016 AFC Championship game. (To be fair, James Harrison was far from the only player who had his limitations exposed that day.)

OK, to be objective a look at the 29 players taken ahead of T.J. Watt in the 2017 NFL Draft does reveal some players who were picked ahead of him, but it is also safe to say the number of General Managers who’d like that draft pick is probably measured in the 20’s.

T.J. Watt made an immediate impact as a rookie, logging 7 sacks and making 1 interception. In his second season he exploded for 13 sacks and added 6 forced fumbles. With one game to play in the 2019 season, T.J. Watt already has 14 sacks, 2 interceptions, 7 forced fumbles, and 34 hits to the quarterback.

Those statistics are excellent, but they fail to capture the true value that T.J. Watt brings to the Steelers defense. 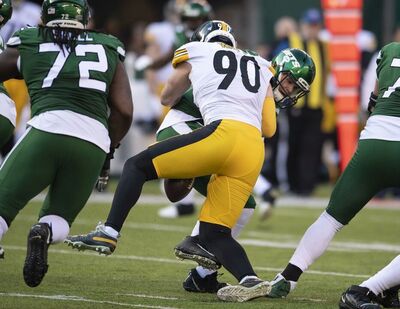 Plays like this strip-sack of Sam Daronold are why T.J. Watt is the Steelers 2019 MVP. Photo Credit: Karl Rosner, Steelers.com

T.J. Watt has delivered this level of playmaking to the Steelers throughout 2019. To see a recent example, look no further back than last week against the Jets. Mason Rudolph had just come off the bench for Devlin Hodges and gotten the Steelers on the board near with 1:22 left to play.

The Jets remained aggressive, and got to midfield with 0:36 when T.J. Watt hit Sam Daronold with one of his patented strip-sacks. 5 plays later and Mason Rudolph was hooking up with Diontae Johnson to tie the game.

There’s no better example of T.J. Watt’s timely playmaking, a tendency which was on display throughout the season.

T.J. Watt’s selection as Steelers MVP should surprise no one. While the Steelers don’t reveal the vote tally, it is likely that Watt’s closest competition was Minkah Fitzpatrick.

And assuming that’s the case, this highlights a dramatic shift in the balance of power within the Steelers roster. The Steelers are an organization that prides themselves on defense, but T.J. Watt’s 2019 MVP selection marks the first time a defensive player has earned those honors since Troy Polamlau won it in 2010.

The winners through the rest of the decade alternated between Le’Veon Bell and Antonio Brown, with Heath Miller winning in 2012 and JuJu Smith-Schuster winning last year. While Cam Heyward would have been a worthy winner in 2017, the Steelers MVP choices accurately reflect a decade dominated by offense and book-ended by stout defense.

Congratulations to T.J. Watt for being the Steelers 2019 MVP.