From the grade book of a teacher who is marking himself down two full letter grades for being so late, here is the Steelers Report Card for the Sunday Night Football loss to the Bills. 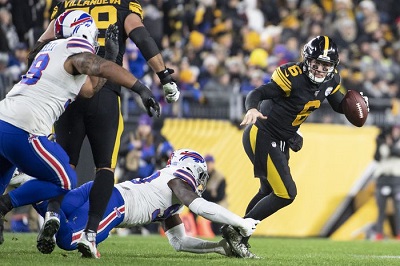 Quarterback
Until Sunday night Devlin Hodges had soared above all expectations. Against the Bills the Duck fell to earth. Devlin Hodges threw a career high 38 passes against the Bills and in the process showed why his best role at this point is as a game manager. He threw four interceptions with each one being uglier than the first. Grade: F

Running Backs
James Conner return for his first action since getting a few carries against Cleveland and showed that he’s clearly the best rusher the Steelers have. Conner gained 42 yards on 8 carries and caught 4 passes for 9 yards, including the only touchdown. Kerrith Whyte 1 carry for 5 yards, Benny Snell had 2 for 1 yard and Jaylen Samuels had 2 for a loss. The running backs weren’t used enough, but that’s hardly their fault. Grade: B

Tight Ends
With Vance McDonald in the concussion protocol, Nick Vannett stepped into the starting role to catch 5 of 6 passes thrown to him for an economical 40 yards. Zach Gentry saw his first action in several weeks, and caught the only pass thrown to him. Grade: C+ 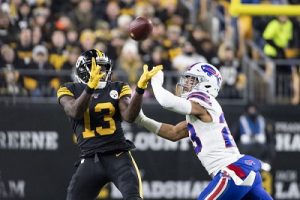 Offensive Line
Devlin Hodges was sacked 4 times and hit another 7 times and was generally under duress all night. The Steelers knew the Bills were going to applying pressure yet, the line failed to meet the challenge. In this site’s post-game write up, the line took a lot of heat for the 9 tackles for losses. But 4 of them were the sacks, and in the estimate of Steel City Insider’s “Heinzsight,” on the rest of the losses came on screens or Wildcat attempts. Grade: D

Defensive Line
Cam Heyward led the defensive line with 9 tackles and batted away a pass at a critical moment. Tyson Alualu had four tackles, a batted pass and forced a fumble that could have been a game-changer. Solid numbers, but the Bills ran the ball reasonably well, and there wasn’t much pressure on Josh Allen. Grade: C

Linebackers
Vince Williams led the unit in tackles splitting a sack with T.J. Watt who also batted away a pass. Bud Dupree had a quiet evening, while Devin Bush had 4 tackles including two for losses. Overall the linebacking was solid, but the Steelers could have used more splash from the unit. Grade: B-

Secondary
Steven Nelson had an interception which should have been a game changer. However, that must be balanced by the fact that John Brown made critical catch after critical catch. Terrell Edmunds led the team in tackles. Joe Haden blew his assignment on one of the Bills touchdowns. Grade: B- 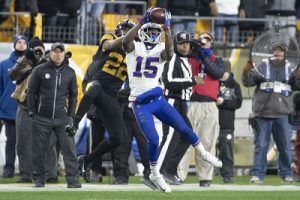 Special Teams
Jordan Berry shanked his first punt of the season at the worst possible time. The Steelers gave up a 12 yard punt return, although Diontae Johnson had two solid returns, and Kerrith Whyte did a respectable job on kick returns. Chris Boswell was perfect kicking. Grade: D

Coaching
This was hardly a flawless game from Keith Butler’s defense. But the Bills only went the length of the field twice, and the Steelers defense did an excellent job in forcing a Red Zone turnover into a field goal situation.

Ah, yes, the offense. Randy Fichtner has taken a lot of heat in some quarters this season for his play calling. To a large extent, this site has refrained from joining the chorus because:

However, Randy Fichnter deserves the criticism he’s getting following the Bills game, and then some. As Ed Bouchette pointed out in The Athletic, after T.J. Watt’s forced fumble, the Steelers held a 10-7 lead, and lined up in the shotgun and called 3 straight pass plays, the second two of which ended in sacks.

The lopsided run pass ratio has come into focus, but as Jim Wexell pointed out, before the score was tied the ratio stood at 22-14. Point taken, but the Steelers didn’t seem committed to establish the run, which is perplexing, given how well James Conner was running.

His balancing act failed against the Bills costing them a victory in a game that the Steelers could and should have won. Grade: D