Maybe you’re one of those Steelers/football fans that likes to say things like, “I’d much rather watch a low-scoring defensive-battle than a shootout.”

First of all, no you wouldn’t. And, second, even if you think you would, I encourage you to go back and watch some old NFL games from the early-’70s, back when bump-and-run coverage was still a thing. And I’m not talking about old highlights provided by NFL Films, complete with the iconic music as a backdrop and John Facenda’s heavenly voice doing the narration. Go back and watch some old network broadcasts on NBC, CBS or ABC–they’re usually readily available on YouTube.

Speaking of 13-10 snooze-fests, maybe that will be the title of the Steelers NFL Films-produced highlight show that’s released to the public each and every summer. It would be fitting, since most of Pittsburgh’s games ended with scores in the teens–and they were just so hard to get through. 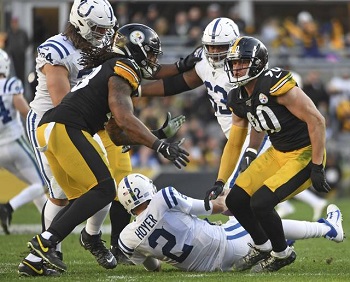 Don’t get me wrong, it was nice to see the resurgence of the Steelers defense. It was encouraging to watch the unit carry the team for most of the year, following the season-ending elbow injury suffered by quarterback Ben Roethlisberger in Week 2.

And I’d be lying if I told you I didn’t have a lot of fun watching T.J. Watt wreak havoc on quarterbacks week after week, to the tune of 14.5 sacks. How about his bookend at outside linebacker, Bud Dupree, who had a career year with 11.5?

How about all of those takeaways? What suddenly brought those on?

And perhaps the most important new element to the Steelers defense in 2019: an ability to close out a game while holding a slim lead, something the unit did multiple times–including in one-score wins over the Chargers, Rams, Bengals, Browns and Cardinals, games where the opposing offenses had the football late in the fourth quarter and a chance to either win or tie.

Yes, the return to defensive dominance really was a lot of fun and helped make fans believe the impossible could happen:

But hindsight being 20/20, it’s easy to see now that people were just getting swept up in the fun times the defense was providing. Because “lousy” may be too kind when describing the Steelers offensive struggles in 2019.

It was painful to see. Even at their best, it was hard to watch quarterbacks Mason Rudolph and Devlin Hodges perform without cringing just a little. And at their worst? Let’s just say it’s a good thing those little “bricks” they sell down at the Strip District are made of foam and not the stuff they use for the ones that build houses.

But what could you do? Even before Roethlisberger’s injury, the other two “Killer Bees” Antonio Brown and Le’Veon Bell had departed. And while JuJu Smith-Schuster and James Conner looked more than capable of filling the voids created at both the receiver and running back position, they were either too injured or too compromised due to quarterback play to really be of much help last year.

But if we’re being honest, while JuJu Smith-Schuster and James Conner are fine players, the odds of them ever reaching the levels of both Antonio Brown and Le’Veon Bell were fairly long to begin with, Big Ben or no Big Ben.

It’s quite popular in this day and age of social media for fans to demand their favorite teams clean house and get rid of the divas and the troublemakers. Such was the case in recent years when it came to Antonio Brown, Le’Veon Bell and even Ben due to his advancing age.

I went to a Penguins game recently and, in addition to the absence of center Sidney Crosby (long-term injury) and winger Phil Kessel (traded this past offseason), the team was missing center Evgeni Malkin due to an illness.

Perhaps not surprisingly, the game went into overtime tied at zero. The Penguins won, but it was quite obvious that they were a different team while missing so much fire power on offense.

Maybe the Penguins are a bad example, considering they’ve managed to remain in playoff contention despite the loss of so much offense. But I wonder what their 2019/2020 campaign would look right now if Malkin were out with some sort of long-term ailment. Instead, he’s carried the team on his back and is playing some of the best hockey of his life. It helps that he’s one of the best hockey players in the entire world.

Imagine if, along with Kessel, Malkin was traded away–something many fans have called for in recent years?

Not only did the Steelers offense lose All Pros, they spent a good bit of 2019 dealing with the absences of the Pro Bowlers who were entrusted with replacing those All Pros.

Obviously, the best teams don’t just dominate on one side of the ball, they find success through balance. But if I had my choice, I think I’d much rather have a potent offense and a struggling defense than the other way around.

That’s what Pittsburgh’s defense was tasked with in 2019, and while it held up better than most units would have, it couldn’t perform miracles.

Finally, the Steelers may have helped you fall in-love with defense again in 2019. But I hope they also forced you to appreciate the importance of a really good offense.