Championship Sunday is here, and once again the Steelers are at home, watching from the couch. So what is a good citizen of Steelers Nation to do? Who should the Black and Gold faithful root for (or against?)

Truthfully, this year is tougher than it has been.

But the Patriots are eliminated. So are the Ravens, taking another obvious and easy choice out of contention. So let’s look at the final four contenders. 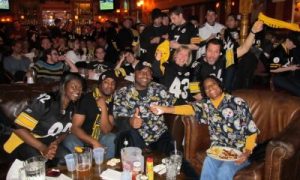 First contender that jumps out at you is Tennessee Titans. They’re coached by former Pittsburgh Steeler defensive lineman and linebacker Mike Vrabel. They’re underdogs, and they win with the old fashioned Steelers formula of stout defense and a ball control running game.

Steelers Nation really doesn’t have much to hold against Kansas City, and heck, my old grad school roommate was a Chiefs fan. And Kansas City is where Bill Cowher matured into an NFL caliber coordinator.

Over in the NFC you have the San Francisco 49ers and the Packers. This one is easier. The 49ers with their legacy of the finesse “West Coast Offense” are in many ways the antithesis of Steelers football. More objectively, if the 49ers win and reach the Super Bowl, they’ll have a chance to with their sixth, making Pittsburgh’s distinction a little less distinct.

And the Packers, while not the Steelers, represent the NFL’s little guy, are community owned, and well, have a hallowed history. So root for the Cheeseheads Steelers Nation.

As far as a potential Super Bowl matchup is concerned, the faithful citizen of Steelers Nation needs to root for whichever AFC team makes it. Let’s face it, fealty to the AFC doesn’t and shouldn’t run deep in the blood lines of Steelers Nation. But it counts for something, doesn’t it?

As noted above, a win by the 49ers gives them six Super Bowls. A win by the Packers would give them five, which puts them in striking distance of Pittsburgh. That’s an outcome to avoid as well.

Root for the Titans to triumph over the Chiefs. Root for the Packers to upend the 49ers, and root for the AFC in the Super Bowl.

But as you’re doing that, let’s also say a little prayer asking for a full recovery of Ben Roethlisberger and return to championship form so that this time next year, there’s no ambiguity over who to root for.