The Steelers 2019 season crashed to an ugly end at the hands of the Baltimore Ravens in a 28-10 loss at M&T Bank Stadium. On paper, the Steelers were “in the game” until the 4th quarter, but things really weren’t as close as they might have seemed.

While 2019 will hardly go down as a banner year in the Steelers-Ravens rivalry, the truth is that through two contests the Baltimore Ravens exposed the 2019 Pittsburgh Steelers for both what they could be and what they ultimately weren’t. 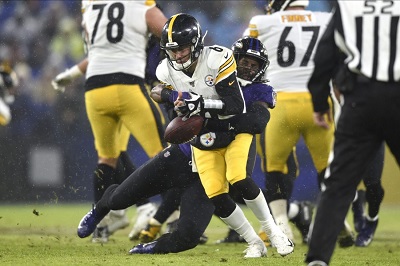 Per ESPN’s stat sheet, the Baltimore Ravens and Pittsburgh Steelers ran a combined 118 plays during the game. But 5 plays suffice to tell the story of the game and, to a large extent, the story of the Steelers 2019 season.

The Ravens had knocked in a field goal with 1:10 left to play, and Mike Tomlin, as he too seldom gets credit for doing, tried to use that time to score. Things got off to a smart start when Devlin Hodges hit Jaylen Samuels for 16 yards to put the Steelers at their 45. His next pass to JuJu Smith-Schuster went incomplete.

Unlike previous occasions, neither Matt Feiler nor any other Steelers player was there to bail him out. The Ravens got the ball at the 23 yard line, and scored a touchdown and, in just 24 seconds, growing a 9 to 7 Ravens lead to a 16 to 7 lead.

The Steelers offense had to punt the ball away after an easy 3 and out to start the second half, but they got it back quickly when T.J. Watt forced a Gus Edwards fumble, with Joe Haden recovering and returning the ball to the Ravens 34.

As it has all season, the Steelers defense both made a key turnover and gave the Steelers offense quality field position.

Benny Snell wasted little time putting the Steelers into the Red Zone by ripping off a 15 yard run immediately after Joe Haden’s fumble recovery. The Steelers offense converted another first down and worked their way to the 8 yard line.

However, when Devlin Hodges failed to connect with JuJu Smith-Schuster it was clear that the offense had already exhausted its “One Touchdown a Game Quota” and would have to settle for a Chris Boswell field goal.

On paper, the Steelers were back in it. Only a touchdown and an extra point separated the Steelers from the lead….

Now down 19 to 10, the Steelers offense ran three plays for zero yards from their own 19. Jordan Berry went back to punt. The snap was good, but he mishandled it, tried to recover, couldn’t hold on to the ball, and the Ravens recovered it in the end zone for a touchdown.

Kerrith Whyte, who has shown some promise as a kick returner, bobbled the kickoff return. While he ultimately regained control of the ball and advanced it for 3 yards, he left the Steelers to start at their 6 yard line.

After throwing an incomplete pass, Devlin Hodges found himself in trouble in the end zone and opted to just get rid of the ball. The officials correctly called it intentional grounding, giving the Ravens a safety, and padding their 16 point lead into an 18 point lead with 4:21 left to play.

Ravens Expose Steelers, For Good and For Bad

When the Steelers and Ravens met on October the 6th, Baltimore had just dropped games to the Kansas City Chiefs and to the Cleveland Browns. Their two victories had come against the Dolphins and Cardinals.

But they were still a quality football team. The Steelers, meanwhile were 1-3, with their lone victory coming over the Bengals thanks in no small part to their surprise use of the Wildcat.

The Ravens knocked Mason Rudolph out of the game, but Devlin Hodges came off the bench to lead the offense to 10 points. Mike Hilton, Kameron Kelly and Devin Bush all had interceptions. Cam Heyward, Vince Williams, Bud Dupree, T.J. Watt, and Javon Hargrave all had sacks.

The Ravens forced overtime, with the help of a highly questionable call on Ola Adeniyi, and the Steelers lost in OT due to a JuJu Smith-Schuster fumble.

In a nutshell, the 2019 Steelers took the AFC Number 1 seed to the wire and came as close to beating them as any other team has done since then. The first Ravens game showed what the 2019 Steelers were capable of when at full health and playing relatively mistake free football.

Let’s state this up front about the 2nd Ravens game:

The story of the second game against the Ravens isn’t much different from the story of the losses to the Bills and Jets. A depleted Steelers team made a workman like show of contesting the outcome.  The defense gave the offense extra chances to win, but turnovers and special teams mistakes put them in a hole they couldn’t climb out of.

In their first game against the Ravens, the Ben Roethlisbergerless Steelers exposed themselves as a team who could give a league heavyweight a run for its money if all went well.

In their second game against the Ravens, Baltimore exposed the 2019 Steelers as a team that very much needed help getting to the postseason, and as one that ultimately wasn’t worthy of a playoff spot.