Taken from the grade book of a teacher who can’t help but be disappointed over how his class performed on their final exams, here is the Steelers Report Card for the season-ending loss to the Ravens. 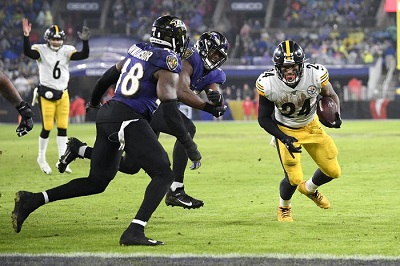 Quarterback
On the plus side, for the first time in 2 games, Devlin Hodges didn’t throw any interception. However, his fumble inside of the two minute warning of the first half was just as bad. Overall, Hodges was 9 of 25 on the day. And while he did suffer some drops, this type of quarterbacking play doesn’t even qualify as “game management.” Grade: D

Running Backs
Benny Snell was the lone bright spot for the Steelers, churning out 91 yards on 18 carries while scorning the Steelers only touchdown. Kerrith Whyte had 3 carries for 1 yard while Jaylen Samuels had 1 catch for 16 yards. Grade: B

Tight Ends
Vance McDonald caught both passes for that were thrown his way including a 12 yarder that converted a third down. Run blocking was solid, which the tight ends contributed to. Grade: C+

Wide Receivers
Diontae Johnson led the group with 4 catches for 54 yards. James Washington, who has been solid all season, had zero catches on 3 targets some of which were catchable balls. No other wide out got a target. Grade: D

Offensive Line
Devlin Hodges was sacked twice and hit 6 times although he was under pressure for much of the afternoon. Run blocking was solid. The offensive line didn’t appear to be a liability against the Ravens, but it certainly wasn’t a strength. Grade: C

Defensive Line
Javon Hargrave, in what will likely be his final game as a Steeler, led the line with 5 passes. Cam Heyward was next with a sack, a batted pass and 2 quarterback hits. Tyson Alualu had four tackles. Gus Edwards ran the ball pretty well, as did RGIII. This isn’t all on the line, but run stopping starts with them. Grade: C

Linebackers
Devin Bush led the team with 12 tackles, Vince Williams was the next best linebacker with 7, followed by T.J. Watt who had 5, a half sack and a batted pass and 2 QB hits. More importantly, T.J. Watt also forced a fumble which could have been a real difference maker. Bud Dupree had a sack and two QB hits. Linebacking was solid, but the Ravens rushing attack was strong. Grade: B-

Secondary
RGIII completed 11 of 21 passes, or just barely above 50%, and the Ravens were 7 of 16 on third downs. Steven Nelson batted away two passes, Joe Haden batted away another while ending the game with an interception. Mike Hilton had a half sack, shared another tackle behind the line of scrimmage and added another QB hit. Minkah Fitzpatrick and Terrell Edmunds looked strong in run support. Grade: B- 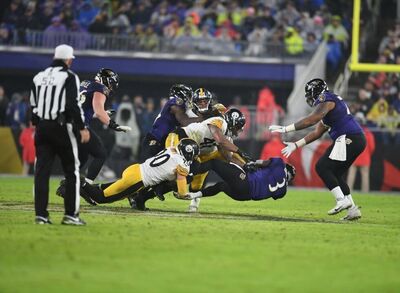 Special Teams
On the plus side, Diontae Johnson logged two solid punt returns….

Sure, the Steelers chances of scoring 9 points in those last 4 minutes were slim, but that doesn’t change the fact that the touchdown killed chances of a comeback.

Kerrith Whyte also muffed the kick return on the following play, which set up a safety. Oh, and the Steelers gave up a fake punt. Grade: D

Coaching
There’s really not a lot to say.

On offense the Steelers game plan seemed to be to try to grind it out on the ground and only pass when necessary. The Steelers executed the first part of that reasonably well, the second part not so much.

But while the Steelers run defense certainly made any fantasy football owner who started Gus Edwards happy, the fact is that the Ravens never once went the length of the field and all of their non-turnover aided scores were field goals.

While Keith Butler’s boys will not and should be let off the hook for giving up an easy touchdown after Hodges fumble return, overall the defense played well enough to win.

It would be easy to come down on Mike Tomlin for ending the season with 3 losses, the third of which looked worst of all. But even the best head coach can only outwit of the law of averages for so long. Grade: C

Unsung Hero Award
Conditions were awful and his opportunities were limited. But Chris Boswell went out and made both of his kicks and he did in workman like fashion, as he has done all season long, and for that he is win the Unsung Hero Award for 2019’s season-ending loss to the Ravens in Baltimore.