Duck Season was in full bloom (or whatever is supposed to happen when ducks are in season) when the Pittsburgh Steelers hosted the Bills for an epic Sunday Night Football Match-up at Heinz Field on December 15.

When I refer to duck, of course, I am talking about Steelers rookie quarterback Devlin Hodges, who was set to make his fourth start against Buffalo. I was tailgating with some friends that night at Heinz Field, and believe me when I tell you, people were believing in the youngster affectionately known as Duck. There were Duck hats. There were Duck t-shirts. There were Duck signs. There were those things people blow into when they want to make righteous duck sounds–including Duck, himself, when he got his nickname by winning a national duck calling contest back in 2009.

After all, here were the Steelers, a team that started 2019 by losing its most precious resource–quarterback Ben Roethlisberger–to a season-ending elbow injury in Week 2. The moment that news broke, nobody gave them a chance to do anything, other than lose 10-plus games. Yet, Pittsburgh entered this important Week 15 contest with an 8-5 record and the inside track on the fifth seed. Buffalo was 9-4, but if Pittsburgh won out, it would enter the playoffs as the top wildcard entrant. 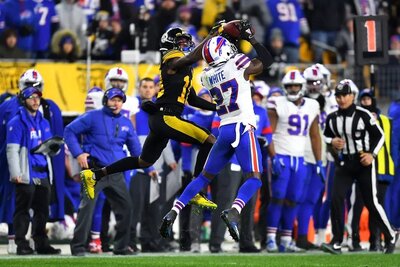 Neither team came into the night with a stellar offense–especially the Steelers, who, again, were pretty compromised due to injury.

Experts and fans, alike, predicted the Sunday night showdown would be a defensive struggle, and the game did not disappoint in that regard.

The offensive play on both sides was pretty ugly, as the two teams spent the majority of the game exchanging punts, sacks, three and outs and turnovers.

One Steelers turnover near the end of the first half was especially damning. Shortly after cornerback Steven Nelson intercepted a pass by Bills’ quarterback Josh Allen and returned it to the Buffalo 20, Pittsburgh had a first and goal from the 10-yard line. Trailing 7-3, if the Steelers could score a touchdown on this possession, they not only would have the momentum, but they would get the football to start the second half. Unfortunately, on a first down play out of the wildcat formation, rookie receiver Diontae Johnson fumbled a bumbling hand-off from running back James Conner, and the Bills recovered.

Fortunately for the Steelers, they were able to save face by taking the second half kickoff and marching downfield for the go-ahead touchdown on an 11-yard pass from Devlin Hodges to James Conner.

Yes, the offensive play was ugly up to that point. Yes, they squandered a huge scoring opportunity with that fumble near the end of the first half. But this was pretty much par for the course for their 2019 season. Do just enough on offense to claim the lead and allow a defense that had become quite proficient at getting after the quarterback and taking the football away to close out the game.

Not only did the Steelers have the football and a 10-7 lead near the end of the third quarter, they were putting together a pretty impressive drive that had already covered five plays and 25 yards. After a five-yard run by Conner, the Steelers had a first and 10 at the Buffalo 43. Any points on this drive would be huge, and if Pittsburgh could somehow extend its lead to double-digits, that could have been curtains for the Bills.

Unfortunately, the timing was a bit off, and Bills’ all-everything cornerback Tre’Davious White stepped in front of Johnson and intercepted Hodges’ pass at the Bills 33 before returning it all the way down to the Steelers 18. It was White’s second interception of the night and far more damaging than the first one way back in the opening quarter.

Pittsburgh’s defense held strong and limited Buffalo to three points. However, following a quick three and out by the Steelers, the Bills drove 70 yards on six plays and took the lead on a 14-yard touchdown pass from Allen to tight end Tyler Kroft midway through the fourth quarter.

Pittsburgh had a couple of opportunities late in the game to tie the score, but Hodges was intercepted on successive drives to close out the night.

The 2019 Pittsburgh Steelers were never quite the same after that loss to the Bills, and they dropped their final two games–scoring just 10 points each time–to finish the season 8-8 and out of the playoffs.

Up until that fateful Sunday Night matchup at Heinz Field, the 2019 Steelers had been authoring a storybook Cinderella season much like the 1989 Steelers had done 30 autumns earlier.

Sure, it was quite apparent that opposing defenses had figured Hodges out by the time Buffalo came to town, but one wonders if the team would have been able to do enough to sneak into the playoffs had that Bills game not gotten away at the end.

We’ll never know, of course, thanks to Tre’Davious White who made the interception that transformed the Steelers Cinderella season into a Pumpkin.