With the Chiefs 31-20 victory over the 49ers in Super Bowl LIV on Sunday night in Miami, Florida, yet another football season has come to a close.

If you’re a Steelers fan, (and let’s face it, if you’re reading this blog, you most likely are) you might have declared the 2019 season over the second they were eliminated from the playoffs following a Week 17 loss to the Ravens on December 29. 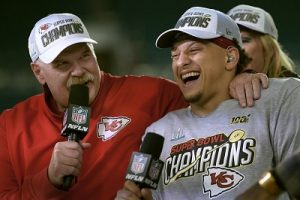 But the Steelers hung in there, and like the great and proud organization that they are, they stayed in that championship chase — albeit with spit, wire and a couple of totally inexperienced quarterbacks in Mason Rudolph and Devlin Hodges — much longer than anyone thought they would.

They made us believe in and love defense again. They gave us a glimpse into what the future could be with T.J. Watt, Minkah Fitzpatrick and Devin Bush leading the way.

However, that talk is talk for another time. I can’t speak for anyone else, but I waited for the 2019 Steelers season to start the moment Super Bowl LIII was over last February.

I talked about free-agency, the draft, OTAs and mini-camp. And when training camp finally arrived at the end of July, I could see the light at the end of the tunnel. I knew it was just a matter of time before the Steelers were kicking off against the Patriots on Sunday Night Football.

Again, the 2019 season wasn’t one that you or I or any other Steelers fan would have considered ideal–far from it. But it was a season, and aren’t those always great?

Isn’t it fun to have something to look forward to? Isn’t it awesome that we can derive so much pleasure from a sport and a team that we’re not directly involved with?

I also soak up every last ounce of the playoffs, even when the Steelers aren’t in them. I want to witness the drama and the excitement. I want to feel the good emotions as well as the bad ones that other teams and their fans experience in January and February.

The Chiefs won their first Super Bowl in 50 years. Think about that for one second. That’s a long time to go in-between Lombardi trophies. The 49ers won their fifth title back in 1994, and they’re still one shy of number six, which has been the standard for excellence since the Steelers won Super Bowl XLIII 11 years ago.

The Patriots, who are deciding on whether or not they want to bring back 43-year old quarterback Tom Brady next season, might be stuck on six Super Bowl titles for the next 11, 25 or, heck, even 50 years.

Many great men have played and coached in the NFL, and most of them will probably tell you just how hard it is to reach the Promised Land. To do it once is difficult enough. To sustain that kind of success over a period of years and sometimes even decades? That’s a whole different level.

This is why I own books about the Super Bowl. This is why I have old VHS tapes of NFL Films Super Bowl highlight shows. This is why I now often go to YouTube (I’ve graduated to streaming television) and watch whatever archived football material I can find.

A Football Life, ever see that show? And not just the ones that highlight former Steelers coaches and players. Check out the one about Bill Walsh, the late, great head coach of the 49ers, a man that in many ways was the godfather of the modern passing game. Find the one on Terrell Davis, the former Broncos running back who had his career cut short due to injury.

Go on Youtube and search for Missing Rings, a bit of a spin-off of the America’s Game series that chronicles some of those really great teams that could never truly get over the hump.

Oh well, Super Bowl LIV is in the books. I guess the countdown to September and the 2020 season is on.

The NFL offseason is a long one, but only because the NFL regular season is worth waiting for.