First Round Draft Picks generate attention. Their success or failure is pronounced the moment their names are announced.

Shades of grey rarely nuance these opinions. Such is the nature of the beast. Then there is Bud Dupree, whose journey as a First Round Pick might sit in a class all of its own as his arrival at free agency shows….

No one questioned Bud Dupree’s athletic talent, but everyone agreed he was “project” who needed to develop. Bud Dupree won the starting job, and when he notched 3 sacks in his first 5 games it looked like the rookie was going to prove a lot of people wrong.

The Steelers activated him in week 10 and within a few games he was exploding for 2.5 sacks against the Bills and followed by consecutive sacks in the Steelers final two wins of 2016.

Unfortunately, Dupree disappointed during his next two seasons. Sack production remained static and flipping him with T.J. Watt helped T.J. Watt, but did nothing for Dupree. Coaches leaked that Dupree was doing well in pass coverage. That might have been true, but these were also the same coaches that assured us, off the record, that Jarvis Jones’ was providing robust run support support…..

The Steelers nonetheless picked up his 5th year option, with Kevin Colbert proclaiming that Dupree was only “scratching the surface” of his talents. 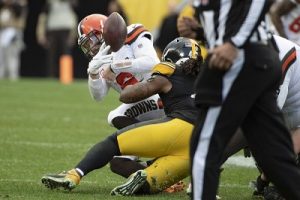 In 2019, Bud Dupree exploded justifying the faith the Steelers had entrusted in him. Bud Dupree registered 11.5 quarterback sacks. Perhaps more importantly, he also forced 4 fumbles, helping change the course of several games. While some 2nd generation stats suggest that Bud Dupree’s wasn’t as dominating as his 2019 sack total suggests, he did give the Steelers their first double-digit outside linebacker sack duo for the first time since the days of James Harrison and LaMarr Woodley.

The Case for the Steelers Resigning Bud Dupree

For the first time since 2010, the Steelers fielded a championship caliber defense. While Minkah Fitzpatrick and Steven Nelson certainly contributed to that, the constant stream of splash plays delivered by T.J. Watt and Bud Dupree were equally important.

Over the last decade the Steelers have invested 3 first round picks, on 2nd round pick, and called Jamese Harrison out of retirement all in an effort to field a dominating duo of outside linebackers.

The Steelers have invested in Dupree’s development, and he delivered in his first year under the direct tutelage of Keith Butler. Is now the time to roll the dice by starting either Anthony Chickillo, Ola Adeniyi or Tupac Skipper starting in his place?

Whether it is by a long-term deal or the franchise tag, the Steelers have options to keep Bud Dupree in Pittsburgh in 2020. They must make sure that happens.

The Case Against the Steelers Resigning Bud Dupree in 2020

1 out of 5 is not bad right? Bud Dupree flopped in his first four years in Pittsburgh, and the Steelers gave him a fifth year because they had no other choice. And they hedged by resigning Anthony Chickillo to a larger than expected contract.

Would you bet your starting tight end, several other key players and $16 million that Bud Dupree can deliver a repeat performance of 2019?

There are a lot of opinions out there as to what the Steeler should do about Bud Dupree. But there is a lot more harder, objective evidence pointing to what Pittsburgh will do.

Art Rooney II, Kevin Colbert and Mike Tomlin have all gone on record listing keeping Bud Dupree as a priority for Pittsburgh this off season.

Expect Bud Dupree to be back with the Pittsburgh Steelers in 2020.