Roger Goodell strikes again. The NFL has lifted its “indefinite” suspension of Myles Garrett, clearing the way for the defensive end from the Cleveland Browns to participate in all off season activities, and play in 2020.

When last we saw him, at the tail end of the infamous Steelers-Browns Body Bag Game, Myles Garrett was ripping off Mason Rudolph’s helmet and then bashing him in the head with it. When last we heard from Myles Garrett, he attempted to justify his attack on Mason Rudolph, charging that Rudolph had provoked him by uttering a racial epitaph.

However there is zero audio evidence to support Myles Garrett’s accusation, suggesting he was simply trying to cover up his crime. 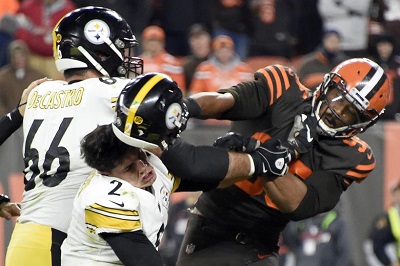 Credit Goodell and/or the NFL’s discipline regime for understanding how to play the PR game.

They lifted Myles Garrett’s suspension less than two weeks after the Super Bowl and before the NFL combine at a time when many writers are taking off and, more importantly, when fans are highly disengaged.

But make no mistake about it, lifting Myles Garrett’s suspension is an injustice, and further serves to show just how arbitrary things are in Roger Goodell’s Kangaroo Count. At the end of the day “indefinite” equals 6 games for Garrett. Let’s add some context around that number.

A decade ago, in Pittsburgh, Goodell suspended Ben Roethlisberger for 6 games after his involvement in an incident involving a young woman in a bathroom bar in Midgeville, Georgia. The local district attorney investigated but declined to even take the case to a grand jury.

I strongly condemn domestic violence and fully agree that the league should punish these acts and further urge the women involved to press charges. Insider trading is also a crime worthy of punishment. And I’m not inclined to walk back one word of the harsh criticism leveled at Ben Roethlisberger during the Midgeville incident.

Even if Ben Roethlisberger committed no crime, he had no business doing what we know he did.

By ripping Rudolph’s helmet off and hitting him in the head with it, Myles Garrett committed assault with a deadly weapon. Had this incident occurred outside a bar in “The Flats” of Cleveland and had there been video of doing the same thing with a motorcycle helmet, and attempted murder charge would not be out of the question.

On Goodell’s football fields assault with a deadly weapon apparently only costs you 6 games.