As the dust is settling on the first phase of free agency, reaction is generally positive to the Steelers signing of Eric Ebron, a former first round draft pick at tight end who most recently played for the Colts. If reports are correct, the Steelers have signed Eric Ebron to a 2 year 12 million dollar contract. 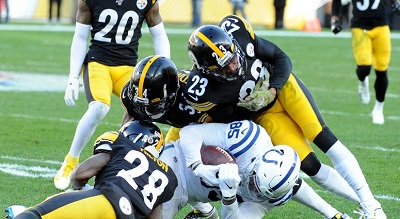 The move comes as a mild surprise, given that Vance McDonald had been slotted as a possible salary cap casualty (and likely would have been gone had the NFLPA not ratified the CBA.)

So instead of jettisoning one high-priced tight end, and going with a bargain-basement renewal of Nick Vannett’s contract, untested rising sophomore Zach Gentry and an unknown draft pick, the Steelers will field two veteran tight ends.

As mentioned above, Eric Ebron’s arrival in Pittsburgh has been met with qualified praise. The key is “qualified.” At the Tribune-Review, Tim Benz conceded that we should be “concerned” and “skeptical” about Eric Ebron’s attitude issues, but argued the Steelers were better for “giving him a shot.”

At The Athletic, Mark Kaboly praised Ebron’s athletic prowess, while warning of his “poor blocking, bad hands and a reputation as a diva….” Over at Steel City Inside, Matt C. Steel admits to having “questions about Ebron as a person and a player.” Yet, Steel is excited about Ebron’s arrival because of his athletic talent and because of the deeper significance that the signing suggests about the evolution of the Steelers offense.

The fact that commentators need to couch their analysis with qualifiers underlines one simple truth:

Can Eric Ebron change that? Perhaps. But history suggests fans should be skeptical.

Dependability is Hard to Replace

If you had to name 1 unsung hero of the Steelers 2nd Super Bowl era, you’d be wise to name Heath Miller. No, Heath Miller didn’t toil in obscurity in the shadow of multiple Lombardis the way, say Larry Brown did. Those spontaneous cheer’s of “Heath!” every time he caught the ball offer sufficient proof. 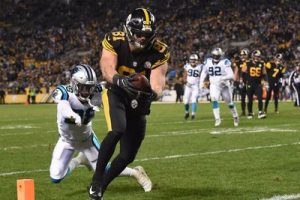 But if you had to make a list of the 4 most essential players of the Super Bowl XL and Super Bowl XLIII teams, you’d like name Ben Roethlisberger, Hines Ward on offense and Troy Polamalu and James Farrior on defense.

Sure, you wouldn’t have to expand the size of the list too much to get to Heath Miller’s name, but several other names would probably make it before Miller.

Heath Miller didn’t bring a lot of star power to the offense, instead he delivered something that is almost intangible: Dependability.

The Steelers drafted Jesse James in 2015, Miller’s last year, and to be honest, Jesse James did deliver some of that dependability in the passing game, albeit on a smaller scale. Knowing that James really wasn’t a viable replacement for Miller, the Steelers made a splash free agent signing of Ladarius Green.

The truth is, during his stint as a Steeler, Ladarius Green delivered “field flipping” capability to the Steelers offense. Unfortunately, Ladarius Green’s Steelers career lasted all of 6 games. Fast forward to the tail end of the 2017 preseason where the Steelers did the (then) uncharacteristic and traded for Vance McDonald.

But injuries kept McDonald on the sideline for much of the 2017 regular season, and he virtually disappeared in 2019. The Steelers (as well as yours truly) thought they’d developed a Xavier Grimble as a legit number 2 tight end going into 2019. They hadn’t and Kevin Colbert had to spend precious draft capital to trade for Nick Vannett.

Vannett did well given the circumstances, but clearly, he wasn’t the answer.

Maybe. But the Steelers best options at tight end since Miller’s retirement have been James and McDonald. More athletic players like Ladarius Green have struggled. Eric Ebron would fit the latter category, but as Mike Tomlin would insist, “He is writing is own story.”