In 2015, the Steelers went to Ole Miss in search of a 5’9″ defensive back who they thought could be a plug-in slot corner at the professional level.

His name was Senquez Golson, a player they selected in the second round of the 2015 NFL Draft. Only problem, Golson never saw any live action for the Steelers, as injuries derailed his career quite literally before it even began. Thankfully, another 5’9″ defensive back from Ole Miss came on the scene two years later and became that all-important slot corner the Steelers had been searching for for years. His name was Mike Hilton. Since 2017, he’s been one of the most effective at his position in the NFL. But now that he enters 2020 as a restricted free agent, can Pittsburgh afford to keep him? 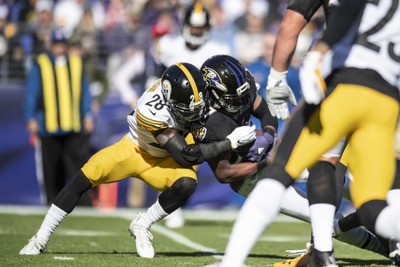 Capsule Profile of Mike Hilton’s Career with the Steelers

An undrafted free agent in 2016, Hilton was signed by the Jaguars but didn’t make the final cut out of training camp and was released. The Patriots quickly signed Hilton to their practice squad but just as quickly–one week later–released him. Hilton was team-less for most of 2016 before landing on Pittsburgh’s practice squad in December of that year.

Hilton became a training camp sensation in 2017 and remained the talk of Latrobe all the way up until the end, when he not only made the Steelers final 53-man roster, he was named the starting slot corner (or nickelback) to begin the year. And oh what a rookie year it was for Hilton, as he recorded two interceptions, six passes defensed and four, that’s right, four quarterback sacks–including a whopping three in a Week 16 blow-out victory on Christmas Day in Houston.

The sack rate hasn’t been the same over the last two seasons, but Hilton’s consistent and impressive play has continued for a Steelers secondary that has gone from a team weakness to a strength with him a part of the lineup. Hilton was an exclusive rights free agent prior to the 2019 season, meaning he had zero leverage to negotiate a new deal. Unlike previous exclusive rights free agents, such as left tackle Alejandro Villanueva, the Steelers and Hilton weren’t able to reach an agreement on a long-term deal. Therefore, Hilton signed his tender which paid him $645,000 a season ago.

The Case for the Steelers Resigning Mike Hilton

After years of searching for the right parts to make the secondary work, the Steelers appear to have finally found the correct formula. Let’s face it, in the modern world of professional football, where passing is king, a slot corner is basically a starter, which may explain why Hilton was on the field for 62 percent of the defensive snaps in 2019. Like with other restricted free agents, the Steelers have options with Hilton.

They can sign him to a low tender of about $2 million. Or if they’re really interested in retaining him, they can place a second-round tender on Hilton, which will cost about $3 million in 2020. That’s a huge hike in pay, sure, but at 25 years old, Hilton is young and his prime years are likely still ahead of him.

The Case Against the Steelers Resigning Mike Hilton

Obviously, Hilton isn’t the biggest Steelers defender who is on the verge of free agency. Bud Dupree and Javon Hargrave have garnered most of the headlines in that regard, and if one or both stick around, it’s going to be quite expensive. Unlike exclusive rights free agents, restricted free agents have the opportunity to go out and negotiate a deal with another team, a deal Pittsburgh would have the option of matching.

But, again, slot corners are essentially starters, and the good ones make good money. With little room under the salary cap, and with Cam Sutton about to enter his fourth year as a versatile member of the secondary, it might behoove the Steelers to allow Hilton to explore other options. If another team bites, maybe they can get a second-round pick for their efforts.

Curtain’s Call on the Steelers and Mike Hilton

This is a tough call. If NFL players vote to accept the proposed new CBA, that changes everything as far as free agency goes. Not only would the salary cap increase, teams would then able to do such things as restructure current contracts so as to create even more space under the cap. Under that scenario, I say you do what you can to lock Hilton up to a long-term deal.

Unfortunately, that scenario hasn’t presented itself just yet. Having said that, however, I believe the Steelers need to find a way to create $3 million under the cap to keep Hilton around for one more year, and they should place a second-round tender on him prior to free agency.