One can debate whether quality tight end play is an essential ingredient to a Steelers Super Bowl season, but Heath Miller’s dependability sure did contribute to wins in Super Bowl XL and Super Bowl XLIII.

One move they made to remedy that in 2019 was to bring in Nick Vannett. At 6’6″ and 261 lbs, Nick Vannett certainly looks the part. However, is he productive enough to be a part of Pittsburgh’s offense in 2020 and beyond? That’s what we’re about to discuss. 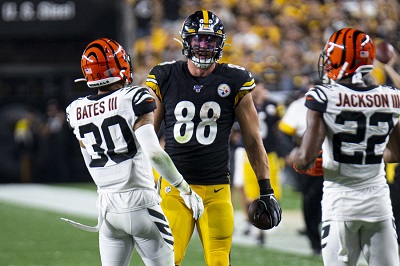 Capsule Profile of Nick Vannett’s Career with the Steelers

Nick Vannett spent his first three full seasons as a member of the Seattle Seahawks, who selected him out of Ohio State in the third round of the 2016 NFL Draft. But with the likes of Jimmy Graham taking most of the reps as the starting tight end, Nick Vannett could never break through the glass ceiling in Seattle, as he started just 16 games and caught 67 passes through the 2019 season, before being traded to Pittsburgh last September in exchange for a fifth-round draft pick.

As the number two tight end behind Vance McDonald, however, Vannett caught only 13 passes for 128 yards over the final 13 weeks. He did step in and start his first game for the Steelers, making a critical third down conversion catch in helping the Steelers beat the Bengals for their first win of 2019.

The Case for the Steelers Resigning Nick Vannett in 2020

Yes, Nick Vannett’s productivity was lacking a season ago, but with the Steelers quarterback situation so compromised with the loss of quarterback Ben Roethlisberger for the final 14 games, very few skill position players showed out.

Again, Nick Vannett looks the part and could certainly benefit from catching passes from a healthy Roethlisberger in 2020. Would he surpass Vance McDonald in terms of productivity? Not likely. However, he could be the number two tight end the offense has been missing since Jesse James left via free agency following the 2018 season.

The Case Against the Steelers Resigning Nick Vannett in 2020

Vannett’s rookie contract averaged just over $760,000 per year, according to Spotrac. While his productivity certainly wouldn’t warrant the type of contract that Jesse James signed with the Lions last year, for example (James inked a four-year deal worth $25 million and included $11 million in guaranteed money — and caught just 16 passes last year), he’s likely to get a raise in free agency.

With the Steelers again up against the cap — even with an increased ceiling after the NFLPA voted to approve the new Collective Bargaining Agreement on Sunday — paying an unproductive number two tight end $1 million-plus may not be a luxury the team can afford.

Besides, Zach Gentry, a fifth-round pick out of Michigan a year ago, is looking to make a leap in his sophomore year. And while his productivity was basically non-existent in his rookie season, he’s a much younger and much cheaper alternative as the number two tight end. And even if Gentry is destined to be a number three tight end, this doesn’t mean the Steelers won’t look to the early rounds of the 2020 NFL Draft to address the position with someone with more upside than Vannett.

Curtain’s Call on the Steelers and Nick Vannett

I think this is an easy call for the Steelers. Vance McDonald, whose salary will eat up over $7 million in cap space next season, appears to be sticking around.

The team needs to save money anywhere it can, and there’s no point in paying two tight ends seven-figure salaries. Therefore, the Steelers will move on from Nick Vannett, hope for improvements from Zach Gentry in his second season, and fortify the position in the upcoming draft.