The Steelers history at safety is a minor study in contractions. Hall of Famers Troy Polamalu and Donnie Shell entered the league as first round draft picks and undrafted rookie free agents. On the flip side, premium picks like Shamarko Thomas and Anthony Smith floundered, while late rounders like Darren Perry soared.

With that backdrop, we come to Sean Davis, who played safety for the Steelers for four years and is about to become a free agent. 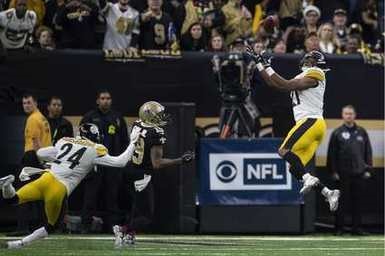 Capsule Profile of Sean Davis’ Career with the Steelers

By the end of 2015, it was clear that the Shamarko Thomas experiment had failed and the Steelers responded by drafting Sean Davis in the 2nd round of the 2016 NFL Draft.

As a rookie, Sean Davis looked like a steal, earning a starting spot and rookie of the year honors. Davis excelled in run support, hauled in an interception and recorded a sack. In the playoffs he atoned for a costly mistake with a key pass defense in the end zone to help seal the win against Kansas City.

The truth is that Davis played reasonably well early in the season. Yet, the entire defense slipped following injuries to Joe Haden and Ryan Shazier and Sean Davis slipped with them, taking bad angles at critical moments and by getting abused by Tom Brady and Rob Gronkowkski in the Steelers 2017 loss to the Patriots at Heinz Field.

The Steelers moved Davis from strong safety to free safety in 2018, where Davis’ steady presences helped the Steelers limit long gains which had plagued them the previous season. Unfortunately, Davis’ most memorable play of 2018 was when he KOed Joe Haden, transforming an certain end zone interception into a touchdown in the loss to the Chargers.

Sean Davis got injured during training camp in 2019, missed the season opener. He played in the home opening loss to the Seahawks, aggravated his injury and was out for the season.

The Case for the Steelers Resigning Sean Davis in 2020

If Terrell Edmunds or Minkah Fitzpatrick gets hurt in 2020, who do you want as your “Next man up?” Sean Davis, Jordan Dangerfield or Marcus Allen?

Sean Davis isn’t going to supplant either starter, but he’s clearly a starter-capable backup and superior to any player the Steelers could find in the 2020 NFL Draft or as a veteran minimum free agent.

Really, the only question is why haven’t the Steelers already signed him…?

The Case Against the Steelers Resigning Sean Davis in 2020

….The Steelers haven’t signed him because with 3 seasons of starts under his belt, Sean Davis isn’t going sign for a veteran minimum contract, nor does he have any incentive to sign any sort of “home town” discount deal. A “prove it” contract has no point because with both starting safety slots locked down, Davis figures to have little chance to prove anything.

The Steelers got good value out of Sean Davis on his rookie deal, but really, there’s no room for him in Pittsburgh now that he’s a free agent. It is time for both sides to move on.

Curtain’s Call on the Steelers and Sean Davis

While this won’t be popular with a lot of fans, the truth is in pure football terms the Steelers resigning Sean Davis makes a lot of sense. Aside from the depth he’d deliver, the prospect of Sean Davis pushing Terrell Edmunds for playing time isn’t so far fetched.

Pittsburgh perhaps has less depth at safety than it does salary cap space. The disadvantage they face is great. As Bob Labriola pointed out on a recent “Asked and Answered,” if Jesse James can get 22.5 million dollar contract to catch 16 passes as a backup tight end, another NFL teams will certainly give Sean Davis a 7 figure signing bonus to play safety.

It would be great to see Sean Davis stay in Pittsburgh, but that’s simply not going to happen.